EDITORIAL: The Fault in our Justice System 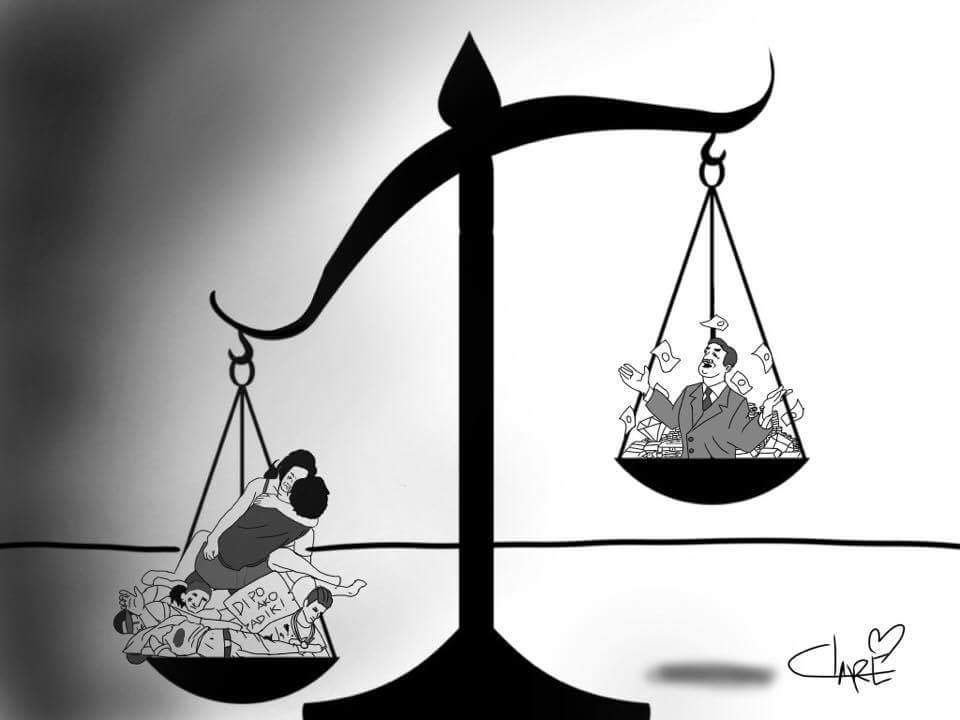 A different kind of Philippines: this is the promise set by President Rodrigo “Digong” Duterte as he pronounced that "change" is really coming to our country. During the campaign period, he said that blood will splatter on the streets as he leads the campaign against drugs. Indeed, blood is present all over the country as bodies of innocent-turned-alleged individuals scattered on the ground helplessly. And while everyone screams for justice and due process, Duterte still encourages more killings. The effect of his "change" is clearly noticeable. But this is not the "change" that we deserve.

Being known as someone who leads his city in Mindanao by having an iron fist, die-hard fans praise more the President’s move. Not only that, when Duterte threatened for the Philippine’s retraction of membership from the United Nation, cursed the former President of the United States of America, and imprecated the Human Right Watch - scandalous statements that caught the eyes of the international media - his supporters continued to hail their leader.

Since July 1 of the previous year, more than 7,000 unexplained deaths of civilians who, all of a sudden, became pushers, carriers, and runners of drugs without proper judicial proceedings. Their cold bodies covered with blood and cardboard with the words “Pusher ako, wag tularan” written on it continue to catch the attention of local and international media institutions. Bodies as young as four, five, and seven years old are being dragged to the chaos they are not even aware of.

The country then cries for justice for these victims; the nation continues to compare the justice system given between the poor and the elites. Filipinos continue to challenge the government by asking when will the administration stop the killings? When will the confusion of the Filipinos be enlightened on whether these victims really fought back or not? Do these victims truly deserve to get killed for being allegedly tagged as pusher, carrier, or runner?

The death of Kian Lloyd Delos Santos last August 16 was the most controversial of all the police operations that were made under the campaign of Duterte. According to the police spot report, Delos Santos fought back, leading to the actions of the policemen to fire back and resulting in an untimely death of the 17-year-old student. However, witnesses’ statements contradicted the report by saying that he was dragged to an alley while pleading for his life as he shouted, “Tama na po. May exam pa po ako bukas.”

Three bullets fired closely at victim’s head, ended his dream in becoming part of the police troops. Three bullets and several posts found in social media account dictated the future of the slain victim. Who would have thought that the 17-year-old Delos Santos would ignite the fire inside the hearts of many Filipinos to finally speak up against President Duterte’s war on drugs? Who would have thought that the cold body of Delos Santos would be the reason for some avid supporters of the current administration to finally realize that this was not what they signed up for when they voted last 2016 elections?

A lot of people may think that this issue should be shrugged off for the country have bigger issues such as Paolo Duterte’s involvement to drugs as well. But we at The LANCE firmly believes that it is not. We stand with our decision that the more we ignore the problem, the more we let the authorities abuse their power. Your student publication does not tolerate the government’s way of handling the justice system in the country. Dropping a P380M drug case of a businessman but still finding time to put an end to the lives of the poor.

Paolo Duterte was innocent until proven guilty after being dragged to a P6.4B drug shipment, and a Chinese businessman’s P380M drug case was dropped. Why can’t we give the same system for everyone: whether rich or poor. Why do we easily judge people belonging to the lower class as a drug user or pusher just by the posts that we saw in social media? Indeed, President Duterte lived up to his promise in changing the country: he changed how someone should be seen, he changed the image of the Philippines.

We, at The LANCE, ask you to not be afraid of what you think is right. Do not let those deaths die in vain. And above all else, know this: blue will always triumph above red.