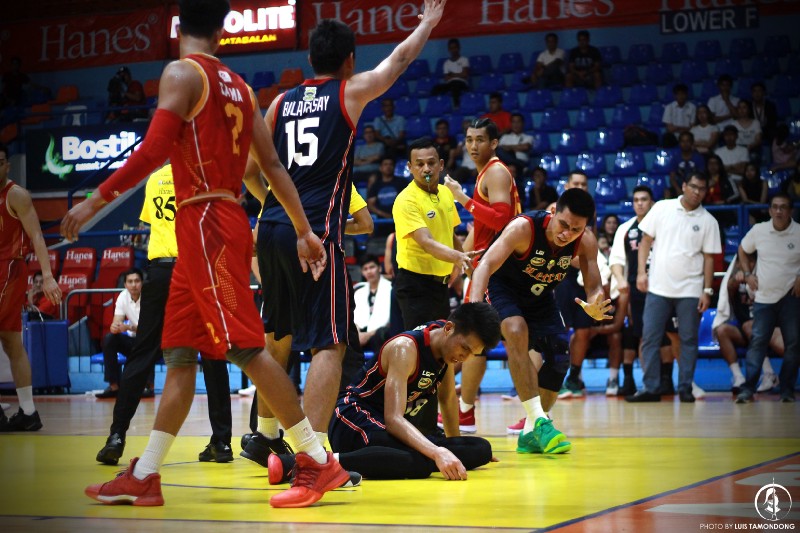 The Letran Knights survived an overtime thriller against the San Sebastian Golden Stags, 79–75, to extend their winning streak to four in the NCAA men’s basketball tournament on Tuesday at the Filoil Flying V Centre.

After exchanging baskets in the first few minutes of overtime, Letran made the much needed separation with JP Calvo sinking both of his free throws to retake the lead for his team, 77–75.
Then, the pint-size guard made a crucial steal which forced San Sebastian to immediately foul Jerrick Balanza with only 31.6 seconds left.

Balanza eventually made both freebies which were already the game-sealing buckets as the Stags went scoreless in the last few seconds.

Letran lost quality big man Jeo Ambohot, who injured his right wrist from a bad fall in the third period. However, the team, just like in previous games, found heroes from the bench in Alexander Mandreza and King Caralipio.

The two were used as replacements for Ambohot even though they play as guard and forward. Both provided steady defense while also helping in rebounds, combining for eight.

Thankfully, other players stood up and went to do big things when the team needed it the most.
Michael Calisaan scored 18 points and grabbed 13 rebounds in a losing effort for the Stags, while Enzo Navarro added 14 points.

The Knights will face the undefeated Lyceum Pirates on Friday to cap off their first round campaign.