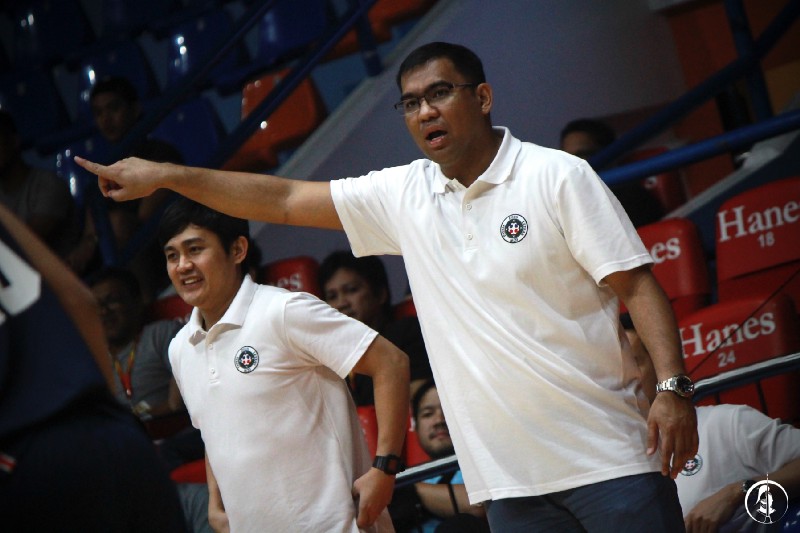 MOVING ON. Letran Head Coach Jeff Napa remains hopeful after the Knights stumble at the hands of the Lyceum Pirates. Photo by Luis Alfonso Tamondong.

Letran’s winning streak ended when a familiar foe in Lyceum rose back from 17 points down to outlast them, 68–75, in the NCAA Season 93 men’s basketball tournament at the Filoil Flying V Centre on Friday.

However, head coach Jeff Napa is staying positive despite the heartbreaking loss which ended their four-game victory run and saw Lyceum notch its eighth.

Leading as much as 17 points, the Knights found themselves slowly being preyed by the Pirates at the second half. A big factor to this was Mike Nzeusseu’s dominance amid Letran’s lack of height due to Jeo Ambohot’s injury.

Losing Ambohot was definitely a huge blow for the Knights especially after Lyceum beat them in the rebounding column, 53–42. But not enough contribution from other guys was also a factor to the loss, admitted Napa.

His so-called “magic bunots” off the bench in King Caralipio and Alex Mandreza, who played well in their previous win against San Sebastian, both struggled; with Mandreza fouling out early and Caralipio only scoring four points.

Admittedly, Napa stressed that it was their own lapses that brought them down the endgame and not the tangibles they lost at the first place.

The Pirates edged away in the fourth period after they sported an 11–2 run behind Nzeusseu’s dominant efforts on both ends. The mischief then continued for Letran who only scored four points in its next possessions, leaving Lyceum to pull away further.

CJ Perez scored 14 points and five rebounds for the Pirates, while Nzeusseu had 13 and 15. Rey Nambatac top-scored Letran with 16 markers and six boards. JP Calvo chipped in 11.

With nine games done, the Knights capped the first round with a 5–4 record to possibly put them at the third spot of the standings (still depending on JRU and EAC). Napa insists major adjustments will be made but is confident that they will come out strong once the second round begins.