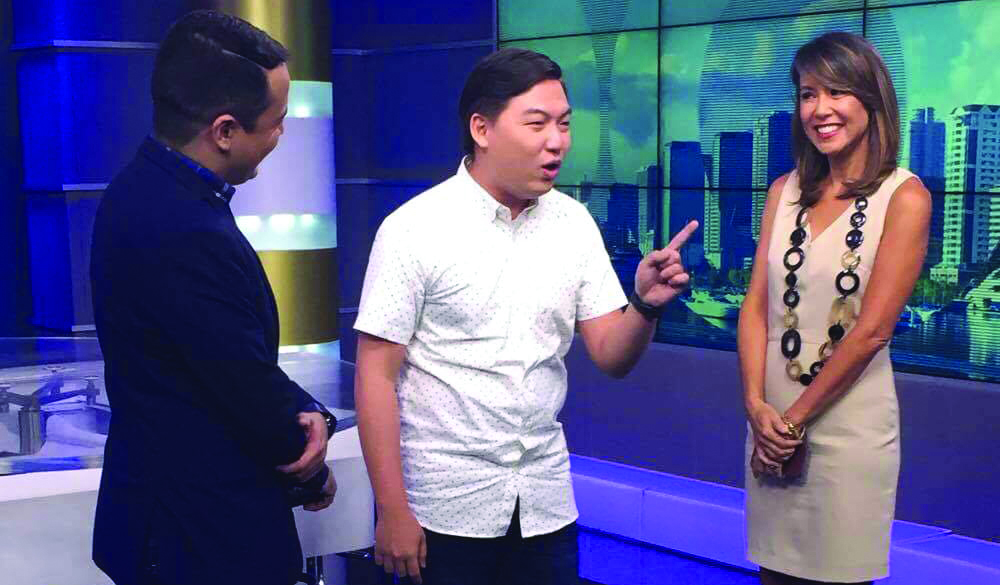 INTO THE LIMELIGHT. Almunus Seth Simon Liu mimics Filipino personalities for the navigation app Waze during his guesting at CNN Philippines. Photo from Miguel Rojales

Seth Simon Liu, an alumnus of the Colegio’s Communication program, is now an online sensation.

Through his uncanny impersonations of celebrities doing Waze navigation instructions, Liu, or ‘Chino’ as he is referred to by his peers, has become the comedic star that has caught the attention of  national media outlets throughout the country.

In an interview with The LANCE, Liu admitted that he did not know how far his video will take him.

“To be honest, I did not expect that my video will go viral. It was just a simple video of me imitating known personalities doing the Waze navigation voice. In fact, after I uploaded it, I logged off my Facebook account so I wasn’t able to keep track of the video’s likes, and comments,” shared Liu. “Hindi ko inaasahan na it will go viral, umabot pa sya ng 1.5 million views. Nakakatuwa kasi 95% yata good feedback lahat as in gusto nila na mag follow up video ako.”

Curiosity and humor sparked to Liu when CNN Philippines posted a question on their Facebook page asking netizens which Filipino celebrity would they like to be featured as Waze’s navigation voice. The app Waze was supposedly looking for a way to help Filipino drivers cope with the Anti-Distracted Driving Act but instead, it became a fun poll because of the hilarious answers from the netizens and this inspired Liu to do the Waze Navigation Voice impersonations.

Some of the Filipino celebrities that he impersonated in the video were Mike Enriquez, Master Hans Chua, Gus Abelgas, Boy Abunda, Kris Aquino and at the last part of the video was a bonus clip of an impersonation of controversial businessman Xian Gaza.

Among all these impersonations, the ‘Kris Aquino’ and ‘Boy Abunda’ were lauded by the netizens which made the video viral and caught the attention of different tv networks, radio stations, and other social media sites.

The clip went viral, Liu recounted, on July 5. Since that time, he has signed an exclusivity contract with ‘Kapuso Mo Jessica Soho’ followed by an interview the next day. He also had an ASAP Chillout guesting where he was interviewed by Darren Espanto, Alora, Alex Gonzaga and Sue Ramirez, followed by a guesting on CNN Philippines’ morning program, New Day. Then, he had a radio guesting in Yes The Best Manila 101.1 FM with Shai Tisai, followed by a TV guesting in Unang Hirit with Hiro Peralta and Phytos Ramirez the next day.

According to his interview in Kapuso Mo Jessica Soho, he started impersonating when he was in high school, and that he is a very observant type of person to the point that he can imitate other people’s mannerisms.

Chino is firm in his conviction to make name for himself in the field of entertainment.

“Swertihan ‘yung [pagiging viral] pero what matters most is ‘yung content, kailangan kasi ng humor ng tao ngayon,” Chino declared as advice to aspiring Youtubers in the future. He also added that he was overwhelmed by the impact of his video to other people, especially from those abroad, saying he was pleased his video somehow relieved their feeling of homesickness.

STAYING GROUNDED
Liu’s fruitful social media fame brought a positive outlook to his career path. He said that being in the limelight helped him realize what he wants to do next after graduation. “[Being viral] led me to know what I really wanted to pursue especially now that I am a fresh graduate hunting for companies where I can work and develop my skills,” Liu said.

Moreover, Liu has been receiving several pieces of advice from his colleagues saying that he should do a follow-up video while he still has a grasp in the spotlight. “Kumbaga, strike the iron while it’s hot—pag may napapanahong issue na naman next time, mag-uupload ulit ako, no need to rush for me. Sa TV and radio naman, marami pa akong guestings—may commercial na rin ako for a smalltime coffee shop,” Liu shared.

Despite the attention, Liu has garnered the past few days, he still remains humble and does not forget the people from his alma mater. “Thank you for supporting my kalokohan video, feeling ko talaga ‘yung 500k na viewers galing sa Letran eh.” Liu humorously said “Again, thanks, Letran! I am proud to have you as my second home.”

To those who dream of following Liu’s way, his tip for them is to never stop trying until their skills are acknowledged. “Pursue your dreams. Gawa lang ng gawa hanggang makilala ka for your skills and talents, but always remember na dapat wala kang natatapakan o nasasaktang tao,” he ended.