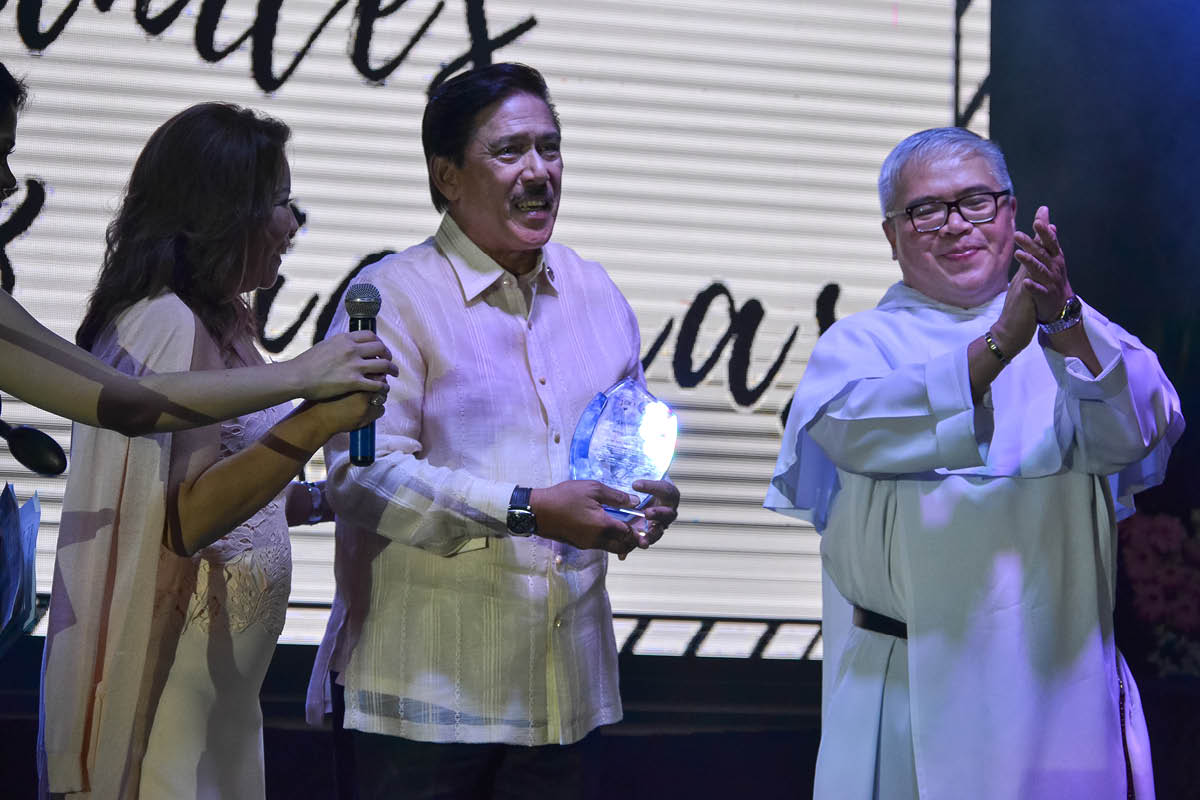 The Colegio gave recognition to the esteemed alumni for being successful in their chosen field of endeavors, last August 30 at the Blessed Antonio Varona Gymnasium.

The program kicked off with a slideshow of the proposed Quadtricentennial building.

Sotto III was recognized for being known in the entertainment industry as well as in politics. LAA president Ms. Rosalie Montemayor-Cruz co-presented and read the plaque inscription.

The lone receiver for the Grandes Amigas y Amigos de Letran award was Ms. Jo-Ann Ching of Ecco Food Corporation. Despite not being a former student of the Colegio, she donated one million to the Colegio Quadricentennial Fund for the publishing of the coffee table book. The award was handed over by Rev. Fr. Clarence Victor Marquez, O.P.

Grandes Familias de Letran was awarded to seven families: Aligada family, Casas family, Mendoza family, Peralta family, Reyes family, Syquia family, and Vinas family whom of which were recognized for passing on the Letranite tradition to their family members and enrolling all of them in the institution. The award was handed over yet again by Rev. Fr. Clarence Victor Marquez, O.P. and alumni chaplain Rev. Fr. Boyd Sulpico, O.P.

Last but not the least is the Grandes Figuras 2018 award given to individuals who gave pride and glory to the Colegio and embodies the supreme ideas: Deus, Patria, and Letran. In total, there were 98 awardees for this year’s ceremony.

Chaplain of Alumni Rev. Fr. Boyd Sulpico, O.P. offered a toast to the awardees for their success.

Grandes Figuras Awardee, Letran Board of Trustees member, and Institute of Communication Chairman Mr. Laurenti M. Dyogi made a speech in behalf of all the awardees of Grandes Figuras 2018 saying they are thankful to the Quadri Executive Committee for their award and also the chance to come together again with his fellow Letranites.

Direk Dyogi also confessed how he forgot the he was a Letranite.

“There was a time [na] medyo nakaligtaan kong ako ay isang Letranista. I was either a UP graduate or an [alumnus] of a different school. But thank you Fr. Clarence for bringing me back home, for inviting me to the board and to become a chairman of Institute of Communication. Now I wear my Letran badge with much pride. Bawing-bawi na ako sayo father ha,” he jokingly said.

As the ceremony comes to an end, Grandes Figuras 2017 awardee Mr. Ruben Palisoc – and also composer of the song – led the crowd in singing the quadricentennial song entitled ‘Dakilang Kasaysayan’.

The night capped off as the crowd sang with pride and glory the Himno del Colegio de San Juan de Letran.