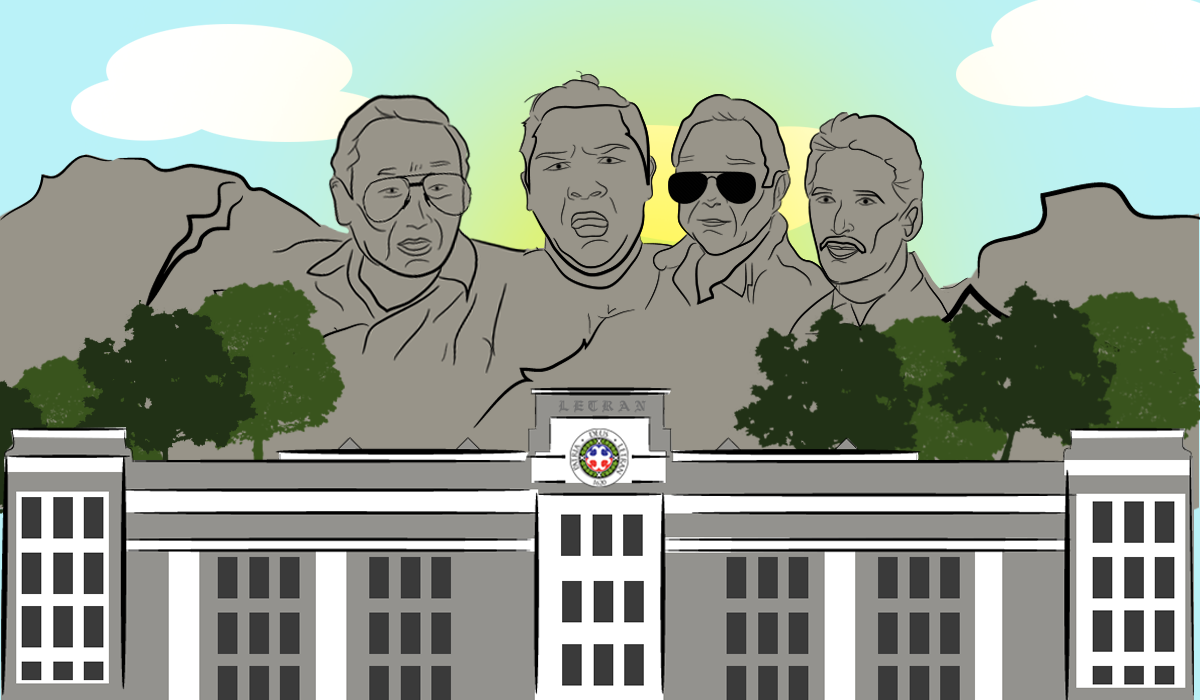 Started just weeks ago, the Colegio, led by the Director of Engineering, Buildings, and Grounds department Prof. Ma. Nancy Balasan, decided to refurbish the facade, removing unwanted dirts and dark green algae infestation since the time of Manuel L. Quezon.

The move to revamp the facade similar to the famous Mt. Rushmore National Memorial sculpture in South Dakota, United States was lauded by most of the administrators inside the Colegio.

“It was really a tough choice. At first, we just want to clean the facade and paint it in a more attractive way. Then I thought of an idea, what if we carved faces out of our facade? What’s more attractive than that?” Balasan asked rhetorically.

She also added that the Colegio has created a Sculpture and Monuments Committee to ensure the project’s design and execution. The same committee also oversees the construction of St. Liem dela Paz and Manuel L. Quezon Gardens.

As for the renovation, Balasan explained that the Colegio will feature 30-foot sculptures of the head of the four notable alumni of the Colegio who all have achieved success in their profession namely (from left to right) Jose Maria Sison, Lloyd Cadena, Tito Sotto, and Ramon Tulfo.

More so, the project was created in the likeness of Mt. Rushmore’s architectural design as the Colegio aims to be a globally competitive competition.

“We have undertaken this project to somehow increase our number of enrollees as we believe that having a sculpture of their faces in our facade will inspire them to do better. But of course, the Office of Alumni and Public of Affairs (OAPA) shall decide on whose faces will be featured,” assured Balasan.

Own field of endeavors

In an interview with The LANCE, the OAPA, led by Directress Ms. Jhennie Caldito-Villar, explained that they only chose four individuals in its list of hundreds of notable alumni.

Asked on how they deliberated on the selection process, Villar said, “We basically had a raffle draw. We listed down all names of notable alumni in the Colegio and I personally took four names out of the fish bowl. Tapos ‘yun, tedious work pero fun naman,” said Villar.

“So as you can see, ang nabunot ko ay sina Joma Sison, si Lloyd, si Tito Sotto, and Mon Tulfo. I have no objections with them kasi they are really great in their ‘own field of endeavors’ naman,” said Villar.

Jose Maria Canlas Sison, or Joma Sison for short, is a Filipino patriot, writer, activist, and Letranite who founded the Communist Party of the Philippines, adding elements of Mao Zedong’s Maoism to CPP’s philosophy. He is also the chief political consultant of the National Democratic Front of the Philippines.

The LANCE believes that Sison is worthy of a spot on the sculpture so Letranites can see what life would be like if you are in exile.

Meanwhile, Lloyd Cafe Cadena is an online sensation in the realm of social media. He is a YouTube vlogger, comedian, and a radio disc jockey in one of Metro Manila’s famous FM radio stations 90.7 Love Radio. Viewing his vlogs and listening to his radio segment, Cadena can surely make you laugh to the extremes. Cadena’s face carved on the wall will be a daily reminder that we are all a joke.

Ramon Teshiba Tulfo Jr. is a Filipino TV host, radio broadcaster, and columnist for the Philippine Daily Inquirer. He, along with his three great brothers namely Ben, Raffy, and Erwin, hosts TV5’s T3: Kapatid Sagot Kita. He also hosts the 23-year-old radio program titled “Isumbong Mo Kay Tulfo!” Mon Tulfo tops all the Letranites in terms of giving free counseling to others. He is the life coach, providing Filipinos with real pieces of advice that can either make or break you.

Last but not the least is everyone’s favorite Letranite. Vicente “Tito” Castelo Sotto III is a Filipino politician, actor, comedian, and an original full-blooded Letranite. He finished his elementary, high school, and college education in the halls of the Colegio. In fact, he passed all theology classes combined in all three different curricula yet you can’t even pass one? He clearly deserves the largest exposure amongst the others.

Joma Sison, Lloyd Cadena, Tito Sotto, and Mon Tulfo: Never mind the controversies and criticism that they have been through, they are to look up to. After all, they are Letranites successful in their chosen field of endeavors.

UP NEXT: Naruto of Konoha files complaints over façade renovation.