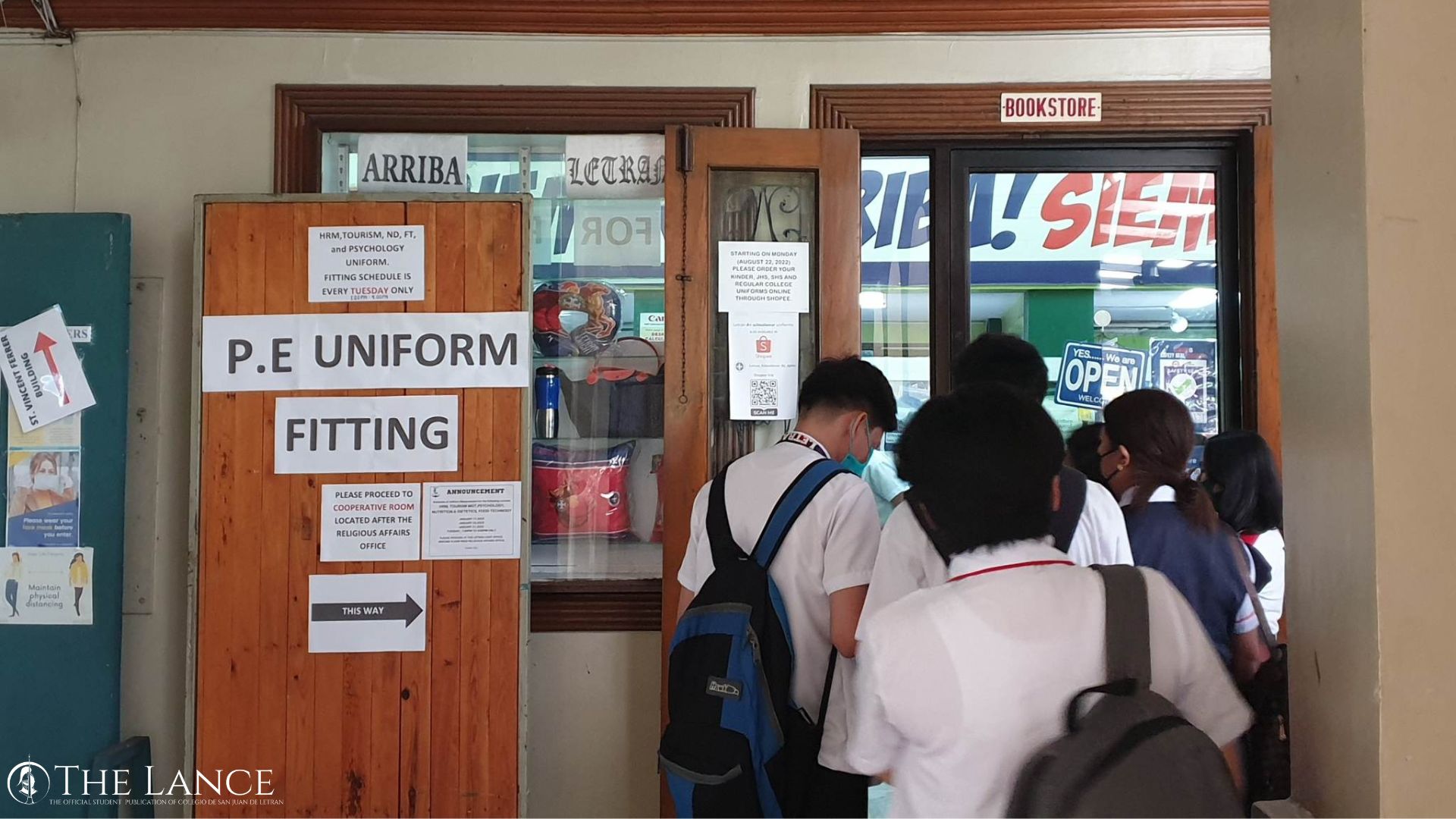 Letranites are seen in long lines despite their busy F2F schedules to secure a uniform only to be met with delays. Photo courtesy of Thea Divina of The LANCE.

Letranites have raised concerns about the slow processing and delivery of student uniforms handled by Colegio’s Bookstore as the school resumes its classes with a 50% face-to-face modality in the new semester.

According to Joan Avelino, Colegio Bookstore’s cashier attendant, they were unprepared for the number of pre-orders, given the late announcement of CHED and DepEd regarding the new face-to-face requirement.

She also stated in an interview with The LANCE that the Colegio’s supplier suffered a loss of employees due to the COVID-19 pandemic, which affected the processing of uniforms.

The cashier also shares that Thompsons Garments in Valenzuela is estimated to deliver the daily uniforms by the end of February.

Avelino further informs that the quadri-centennial polo shirt, a usual Wednesday ‘wash day’ attire of the students, is also expected to have a new batch of deliveries by the end of January.

Some cases exhibit months-long pending and waiting of pre-ordered uniforms, especially on PE sets, regardless of the Colegio Store’s given time frame for item pick-up per pre-order.

According to Communication Arts student Camille Dimaranan, she mainly encountered issues with the processing of her PE uniform, which she ordered on November 2022 and is still currently unavailable.

Pauline Ramos, a CLAS student, also shares her concern over the delay of the PE uniforms, which she ordered on May 2022 and is still out of stock.

Letran's PE uniform supplier is MPM garments. Joan Avelino further informs that the PE uniform was a challenge to provide for the students in 2022, given the lack of production and stock.

PE uniform fitting and stock is available at the Cooperative Room, located after the Religious Affairs office.

Fitting of uniforms for Hotel and Restaurant Management, Tourism, Nutrition and Dietetics, Food Technology, and Psychology students is available every Tuesday, 1:00 - 4:00 PM.

Given the released Department of Student Affairs (DSA) memo on the mandatory wearing of complete and proper uniforms during class days, some students have considered and opted on buying their attire outside of the school due to the Colegio Store’s backlogs.

Camille Dimaranan states her mother considered having her skirt made-to-order in their nearby tailoring shop due to the price difference.

She also states that every Wednesday is wash day, and the Quadri polo shirt is allowed during that day. If the student does not have said attire, wear a school uniform instead. For those without classes, civilian attire is allowed adhering to the Colegio’s dress code.