The leaders in question 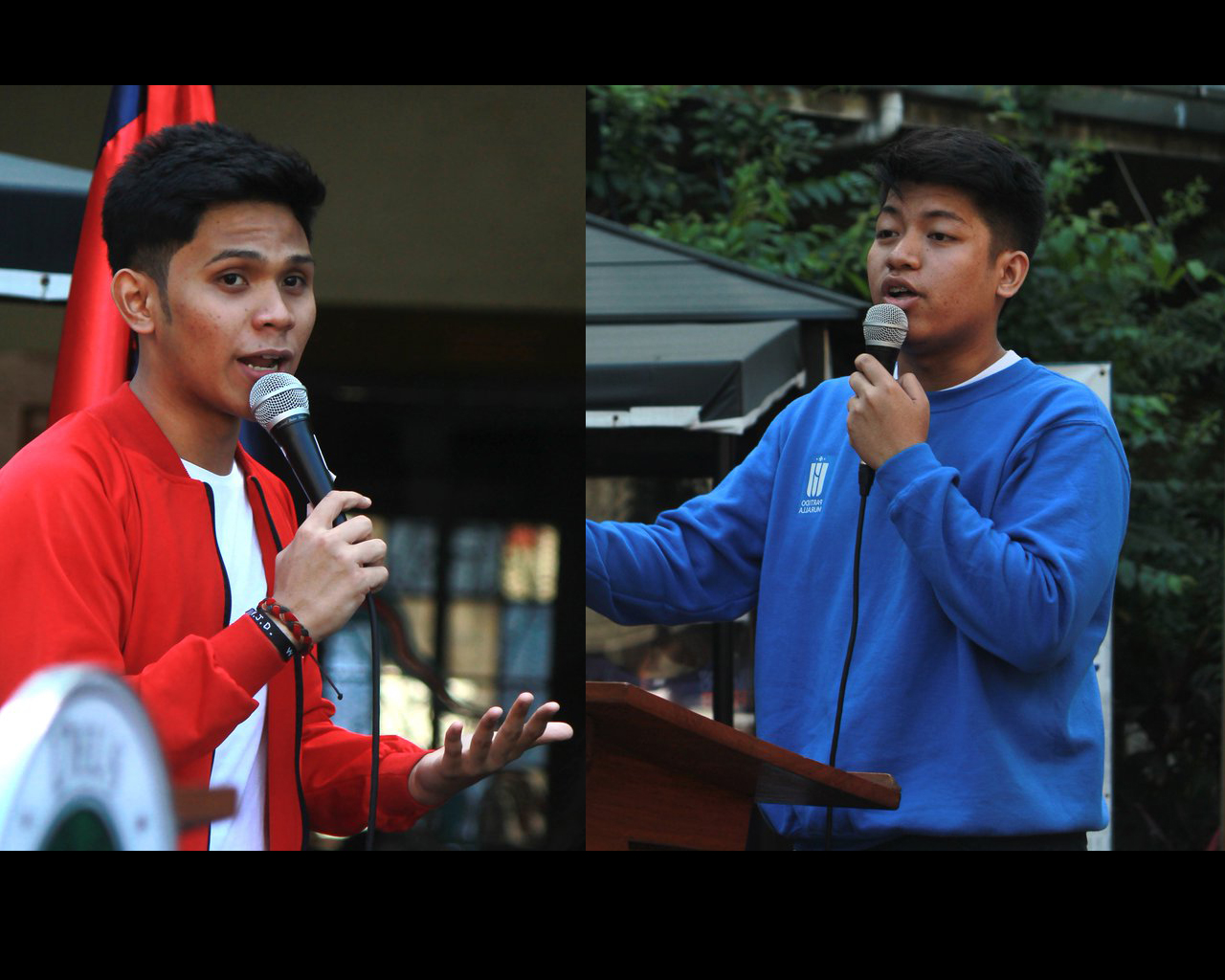 With the blaring of a drumline in the backdrop, a visibly famished LJ Bisco met the embrace of fellow-party members as he stepped off from the stage, fresh from battle. The scene was, at once, celebratory; meanwhile, not more than five-feet away Aksyon Alyansa Letranista (AAL) members, old and new, stood imposingly atop the forum proper, as partisans for his AAL took their photographs. Virtually all of his companions had donned red for the occasion, and Mr. Pantua gave, if only to the untrained eye, a considerable veneer of confidence.

The scene is post-“Tagisan 2018”, a forum for the two Letran Student Council presidentiables held on February 19 at the Quezon Garden, in which the two young men had met moments ago in fiery confrontation, and where the aura had been less amicable than it was contentious.

And “Tagisan” the two did, because the opportunity to hold the would-be leaders to account and be held under scrutiny was anything but wasted. Panelists, comprised of both students and professors, grilled both Pantua and Bisco on their platforms and methods of leadership.

The first actual mention of policy came from Bisco, who, in response to a question about strategic planning for the Colegio, alluded to a “Constituent Consultation” platform that purportedly aims to discuss pressing issues with constituent organizations to higher-ups in the administration. Pantua, like a consummate politician (make of that what you will), ran through one of AAL’s platforms, ‘Rinig ang Hinaing’, and how it seeks to diversify the discussion with what he claimed to be a more ‘diverse’ slate.

Suffice to say, the crowd had all but dozed off, save for the one member of the audience who had abruptly yelled out, “I love athletes!” in a direly-needed turn for the humorous.

Without going into detail into the one-too-many motherhood statements that ran amok in the forum, the confab later presented more challenging issues for the candidates to confront.

For instance, Mr. Nathaniel Mariano, Editor-in-Chief of the LANCE, asked the candidates to address the allegations that the Student Council had regressed into a glorified Party Planning Committee.

Pantua then defended Council, claiming that Council events, like Love for Humanity and the Student Advancement Seminar, had always given students positive to take home.

However, the crucial moment came, in my view, when the question of holding an opposing opinion to that of the Colegio would be tenable in each of the candidates’ prospective governments.

Pantua was adamant in his rejection, claiming that going against the beliefs of the Colegio would not be a “good idea”. Bisco begged to differ.

In an interview with the LANCE, Pantua, currently Auditor for the Letran Student Council, was quick to dispel any rumors about any purported animosity between him and his competitor.

The tone had not been as conciliatory moments before, when he accosted Bisco for having a supposedly repetitive platform, referring to Muralla’s proposed imposition of a Magna Carta for students and a week for the indigenous peoples.

Heading into the tomorrow’s elections, the narrative presented by both candidates is clear; Bisco, after having championed his Political Science constituents for a term, fashions himself a man of the people, who understands the rigors of the regular student, while trying to paint his competitor as oblivious to the problems of the ordinary Letranite.

Pantua touts a resume, indicative of his representing of the country in CIMB Young ASEAN Leaders in Malaysia, and being a member of the Executive Committee of the Council as Auditor.

A disparity in confidence

Heading into tomorrow’s polls, a disparity in their emotions was apparent. Pantua was remarkably sangfroid, while Bisco was more pensive.

In an earlier edition of this piece, a candidate’s achievement and platform name were referred to incorrectly. Changes have since been made accordingly.