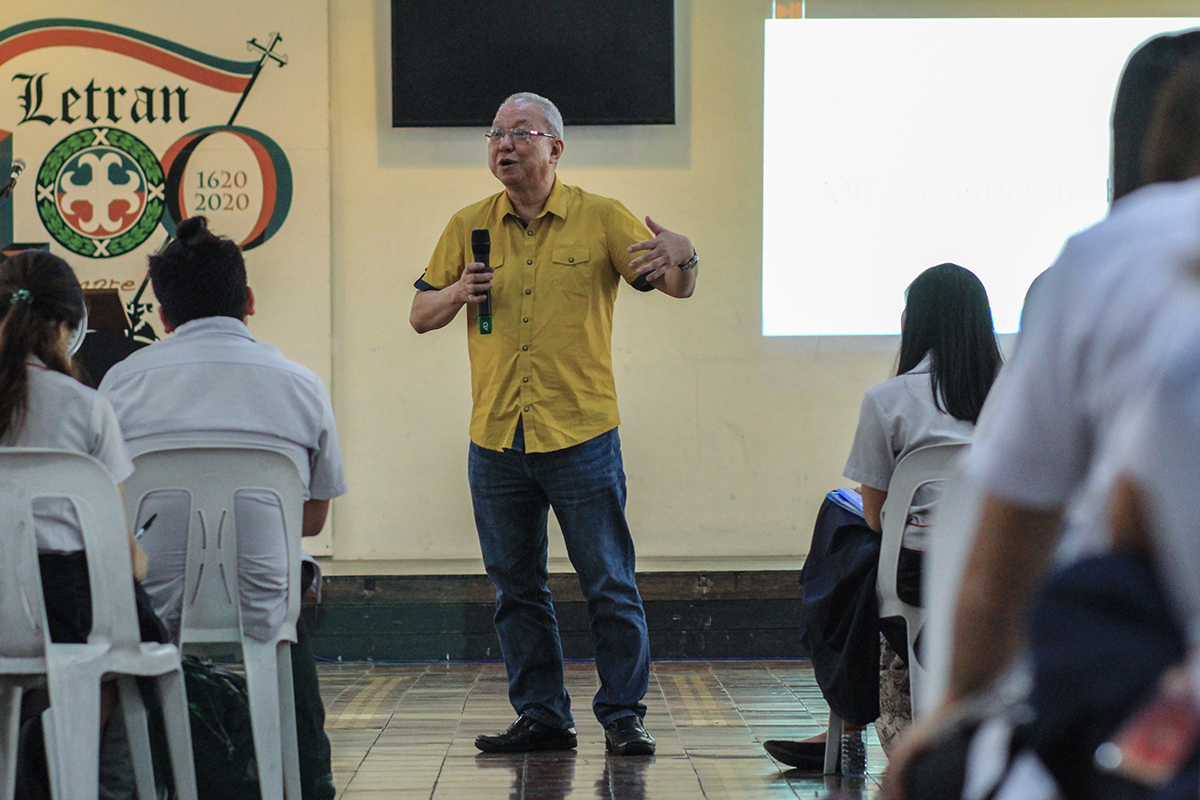 For Letran’s budding writers, it was a chance of a lifetime.

Students from the Colegio’s Institute of Communication (IComm), along with representatives from Senior High School, and select students from Letran Bataan, took a step forward in unleashing their inner creativity and exploring the world of writing in “Scripted ‘To!: A Scriptwriting Seminar and Workshop with Ricky Lee” last February 10 at the Salon de Actos.

As Ricardo “Ricky” Lee, director of critically-acclaimed films such as Himala and Rizal, took the stage,  he started with what really are the important jobs a writer is supposed to do; for the vision to see a lot of things, for the ones faking to be exposed, and how writers are supposed to open a lot of things for people to have knowledge of, like he has done over the years.

“There’s never a single way on telling a story, maraming paraan,” Lee shared of how the birth of the story is never a straight one, but a birth of ideas after ideas sprouting in different parts, and that it is in the writer to connect it into one. He shared clips of some commercials and further explains how each character should possess a “panlabas at panloob na tao” on a story for it to be more alive, and how readers can latch to a character and emphatize with them as both can continue to go along the story. And especially how each and every one of them have a “panloob na tao.”

Plotting a story and a character is something that needs to convey meaning to the people in the not-so-obvious-way, and that the further the story is questioned, the more the story becomes interesting. But however, it’s not all the time that writing can be a fast process.

As Lee said, writing can go many ways. But it is important to pour it all first before trying to point out what’s wrong while writing it. “Let the hundred flowers bloom” first before taking out the beautiful ones.

Moreover, Lee taught the audience that writing is also about finding out a unique voice. A voice that the readers may latch on to, a trademark for all the stories and worlds a writer creates. The writing styles of the one making the story come feel alive. Also, the voice which the readers recognize a writer from, and how millions of people have recognized Lee from. But as acclaimed as he is, he reminded the audience not to aspire to be like him, but to be the best they can be.

As these lessons have been all absorbed by the students, the known writer was more than happy to answer the questions asked of him, providing meaningful insights for Broadcasting and Communication seniors who have presented their stories after his talk for their final projects.

At the event’s close, the legend told his audience, “If you want to write, you should start writing. Don’t wait for the time when you feel you’re prepared, when you’ve learned enough, [because] you will never be able to learn enough. Just write and that’s how you will learn.”