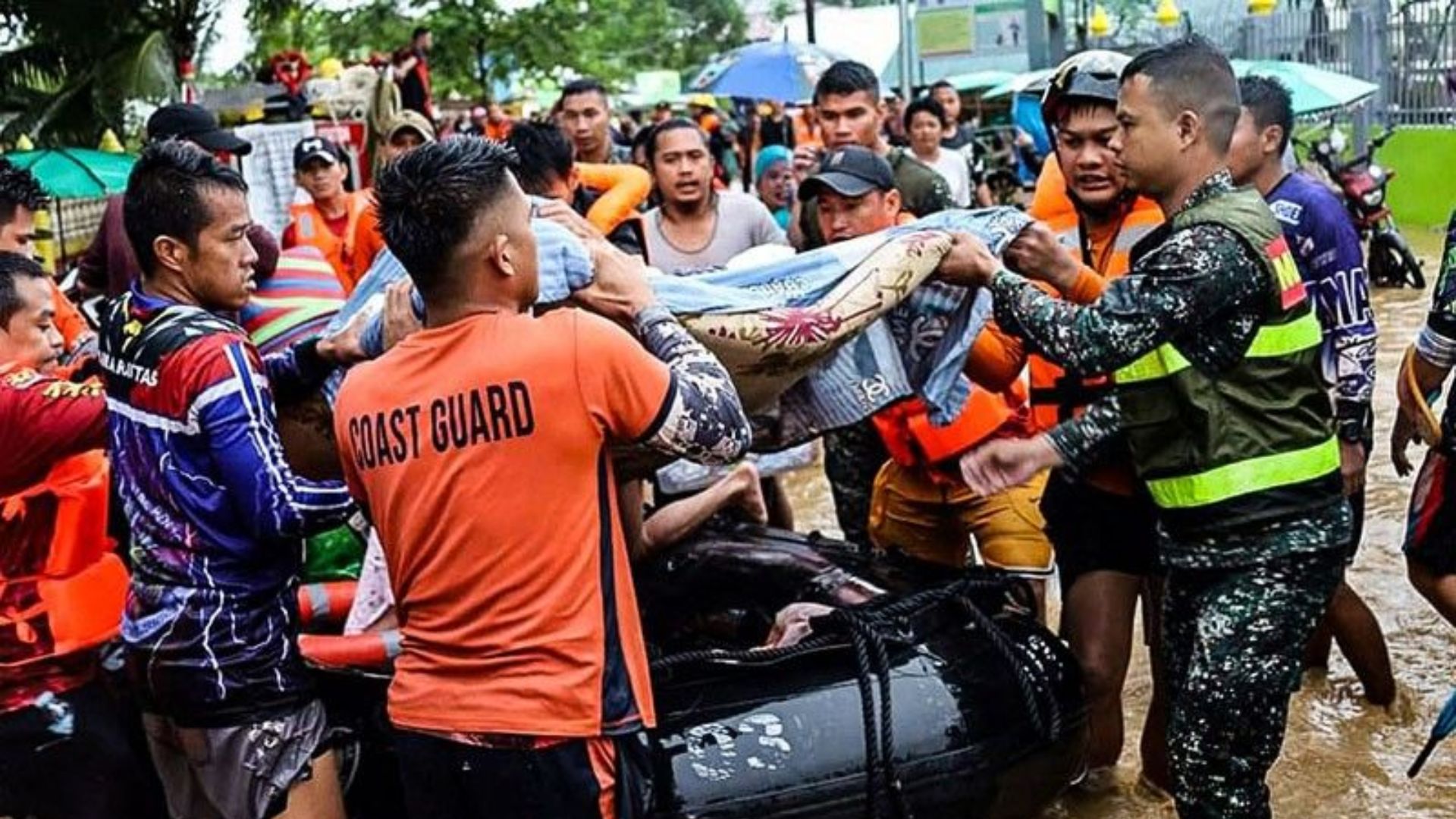 The Philippine Coast Guard and civilians working together to recover a body of yet another life lost to the storm. Photo courtesy of Police Regional Office Bangsamoro Autonomous Region via PhilStar.

Severe Tropical Storm "Paeng" caused heavy rains, flash floods, landslides, damaged homes and landscapes, and a death toll of at least 45 people with 14 missing after the storm, according to the National Disaster Risk Reduction and Management Council (NDRRMC).

Paeng made its multiple landfalls across southern and northern parts of the country on Friday, October 28, carrying winds of 75 kilometers (46 miles) per hour.

It has the international name "Nalgae" and it is the Philippines’ 16th tropical cyclone for 2022.

The Manila International Airport Authority (MIAA) announced at least 102 domestic and 10 international flights canceled due to the severe tropical storm.

BARMM was among the hardest-hit areas in Visayas and Mindanao. Its Interior Minister Naguib Sinarimbo told reporters in Manila that hundreds of indigenous residents were severely hit in Barangay Kusiong, Datu Odin Sinsuat town.

“A relative of one of the residents there went to our operations center and reported that their community was washed out because of the flash floods and landslide coming from the mountain,” Sinarimbo said.

“The report that we received is that there were dead people, and there were also residents who were trapped in the rubble that need to be rescued,” he added.

Landslides and rapid rising flood affected many families past midnight on Friday, October 28.

Seven out of 13 towns in Maguindanao del Norte, including Cotabato City, suffered the impact of the severe tropical storm.

Cotabato City was placed under a state of calamity after 25 of its 37 villages had been submerged, affecting 67,000 residents.

“The flood was so high, and it was the first time that floodwaters had entered our house in the decades that we have been living here in Cotabato,” Sinarimbo said.

Electricity was cut off in Cotabato City and nearby Maguindanao provinces as precaution.

Cindy Ferrer, the information officer for Office of Civil Defense (OCD) Western Visayas, reported flooding as high as rooftops happened in the provinces of Capiz, Antique, Iloilo, Aklan, and Negros Occidental, which affected more than 75,000 people.

In Albay province, more than 600 families, around 3,000 people, live near the slopes of Mt. Mayon was evacuated on Friday.

Several roads and bridges were also reported impassable throughout the country as the storm intensified on Friday.

Some bridges, including the San Juan-Bantilan Bridge, which connects Sariaya, Quezon and San Juan, Batangas collapsed due to the strong flood current brought by the storm.

Paeng’s five landfalls were all in Luzon, but initial reports show Mindanao gravely suffered most of the impact.

Authorities said the overall casualties is close to 185,000 people across the country, with more than 8,000 people made temporarily homeless.

Manila Mayor Honey Lacuna-Pangan, Pasig, and Valenzuela City Governments ordered the closure of its cemeteries, where millions had been expected to visit during the undas weekend, on Saturday.

Due to the onslaught of Severe Tropical Storm Paeng, NDRRMC has recommended declaring a national state of calamity for one year, with House Speaker Martin Romualdez supporting the proposal.

The Department of Social Welfare and Development (DSWD) is set focus on the distribution of Assistance to Individuals in Crisis Situation (AICS) and relief goods to affected areas by the typhoon. The agency have started with its relief operations in Bangsamoro Autonomous Region in Muslim Mindanao (BARMM) on Sunday, October 30, 2022.

Vice President Sara Z. Duterte extends her thoughts and prayers to bereaved and gravely affected families by the Severe Tropical Storm "Paeng." The vice president also assures the nation with the nonstop leading emergency operations by the administration.

Tropical Storm "Paeng" is now a Typhoon and is currently traversing the West Philippine Sea. It is expected to bring moderate to heavy rainfall over the weekend.

For emergencies, below is the list of emergency hotlines: