Letramurals 2022: Ending it with a Bang! 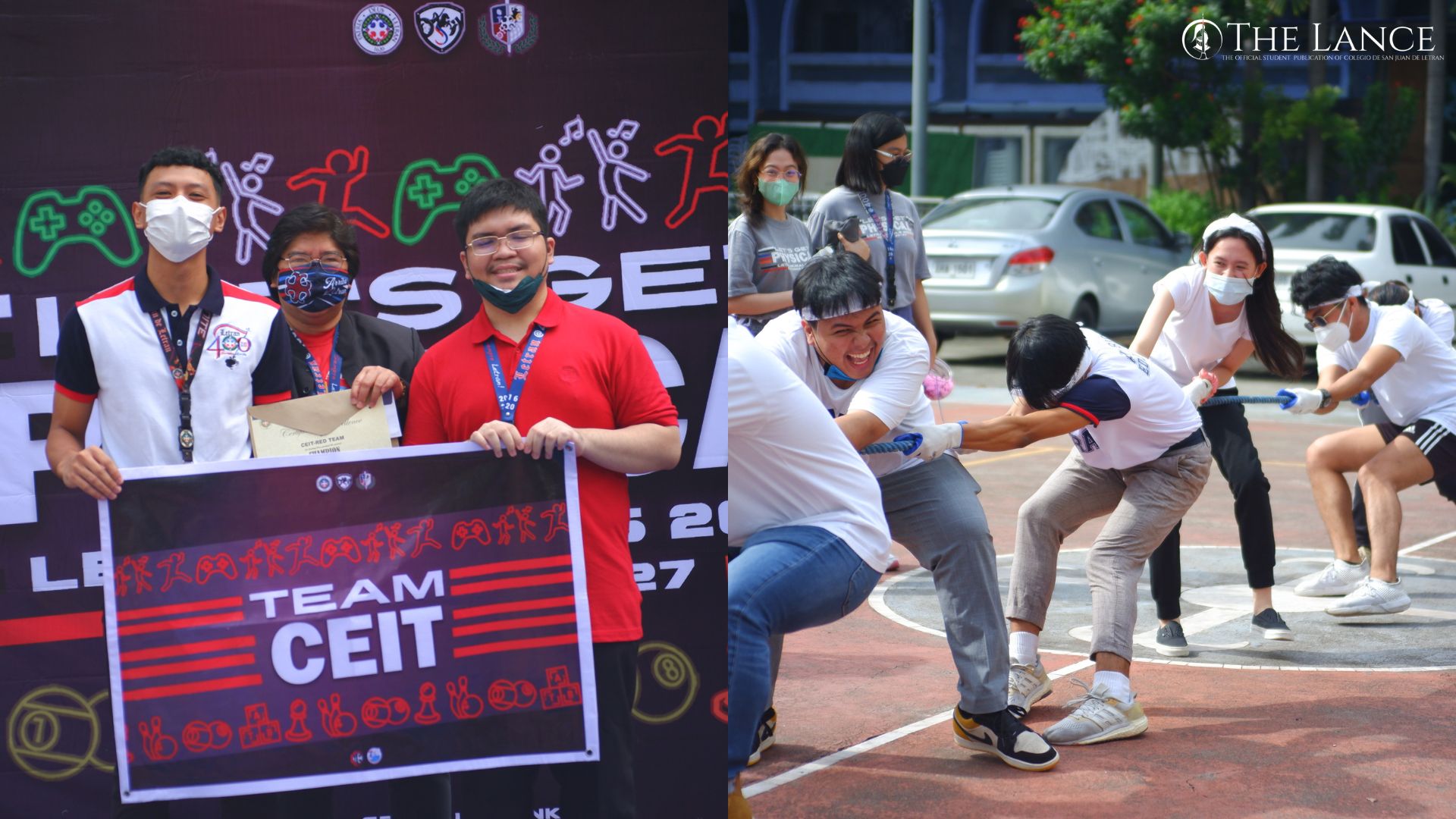 CEIT won the fun games as overall champions (shown in the left) after conquering Tag-of-War (shown on the right). Photo by Eduardo Nollora Jr. of The LANCE.

Letramurals 2022 Day 3 comes to a close with fun games and the awarding ceremony organized by the Letran Student Council and the Department of Student Affairs. The fun games included Tug of War, Tic-Tac-Toe, Archer–Rabbit-Wall, Ping-Pong Jumper, and “Like a Pyramid”.

CEIT took the win in Ping-Pong Jumper and Like-A-Pyramid with 20 points each. After winning Tug-of-War, CEIT was crowned the overall champion of the fun games.

After teams performed their unique cheers, the Department of Student Affairs along with the Letran Student Council and several administrators awarded the winners with certificates and cash prizes at the closing ceremony.

Champions of the Modern Dance competition also performed live for those that missed it during the first day.

Best Dancer as well was awarded for Zumba Dancing along with Several NCAA Season 98 Round-2 tickets for the Letran Vs. LPU match that were handed out through a raffle draw.

The event lived up to the "Let's Get Physical" theme and was a much-awaited staple of Letran’s return to physical events with the LSC assuring the students that they have plenty more in store for the year.

The games started off with the Finals of the Call of Duty Mobile event with the CEIT competing against CBAA 2. The match was a full sweep as CEIT won 3-0 to their name.

Up next was the Finals for Mobile Legends between CBAA 1 and CBAA 2. There was a slight hope for CBAA 2 as they managed to score a win even if CBAA 1 already had a 2-0 lead against them. But despite CBAA 2’s efforts, CBAA 1 still won in the end with a score of 3-1.

Finally, the Finals for Valorant, featured the CEIT vs CBAA 1. Despite the hopes for CBAA 1 coming out on top, the CEIT ended the final game with a score of 2-0 completely dominating the game.

The Bowlers for the second day of the Letramurals 2022 enjoyed knocking down the pins in the bowling lanes of the Playdium Bowling Center in Gregorio Araneta Ave, Quezon City, Metro Manila

In the endgame, CEIT prevailed over CBAA 1 who was trying to narrow the advantage with each passing frame. However, CEIT pulled off a crucial strike in the waning moments to secure the victory with more than 30 points, 499-469.

Both teams dominated the rankings for the first three rounds of the game, which decided their final spots in the endgame. Combining all the scores, CEIT erupted with a total of 1643 pinfalls while CBAA 2 pooled with 1394 pinfalls.

During the billiards event, the four participating teams were composed of two players each. Within the White Team (CBAA1) are Carl Tesoro and Camela Acena. On another note, Riel Janssen Barcelo and Chrysler Limpio make up the Black Team (CBAA2). For the Red Team (CEIT) are George Louis Hosena and Quisha Pam Bongon. Last but not least, the Blue Team (CLAS), Dominador Giducos III, and Nicole Ramirez.

The first round featured a match between CBAA 2 and CLAS, which was won by CBAA 2. Meanwhile, for the other set of teams, CBAA 1 and CEIT, the win was secured by CEIT.

A match between CBAA 2 and CEIT was redeemed once more by CEIT in the second round. CBAA1 did not end up wasting the opportunity to win the match against CLAS.

The third round was resolved by a match between CBAA 1 and CBAA 2, with CBAA1 taking the lead. On the other hand, a match was held between CLAS and CEIT, which was undoubtedly won by CEIT, once again

For the tally, CEIT accumulated three wins; CBAA1 with two wins; CBAA2 with a win; and for the last line, the CLAS.

Along with the order, the final round featured a match between CBAA1 and CEIT. A Race to Five' game to determine the winner. But this time, CBAA 1 pulled a shocker and aced the victory over CEIT

By the determined ranking, CBAA1 was crowned as the victor of the billiards event. The CEIT was the first runner-up, followed by the CBAA2 as the second runner-up, and the CLAS as the third runner-up.