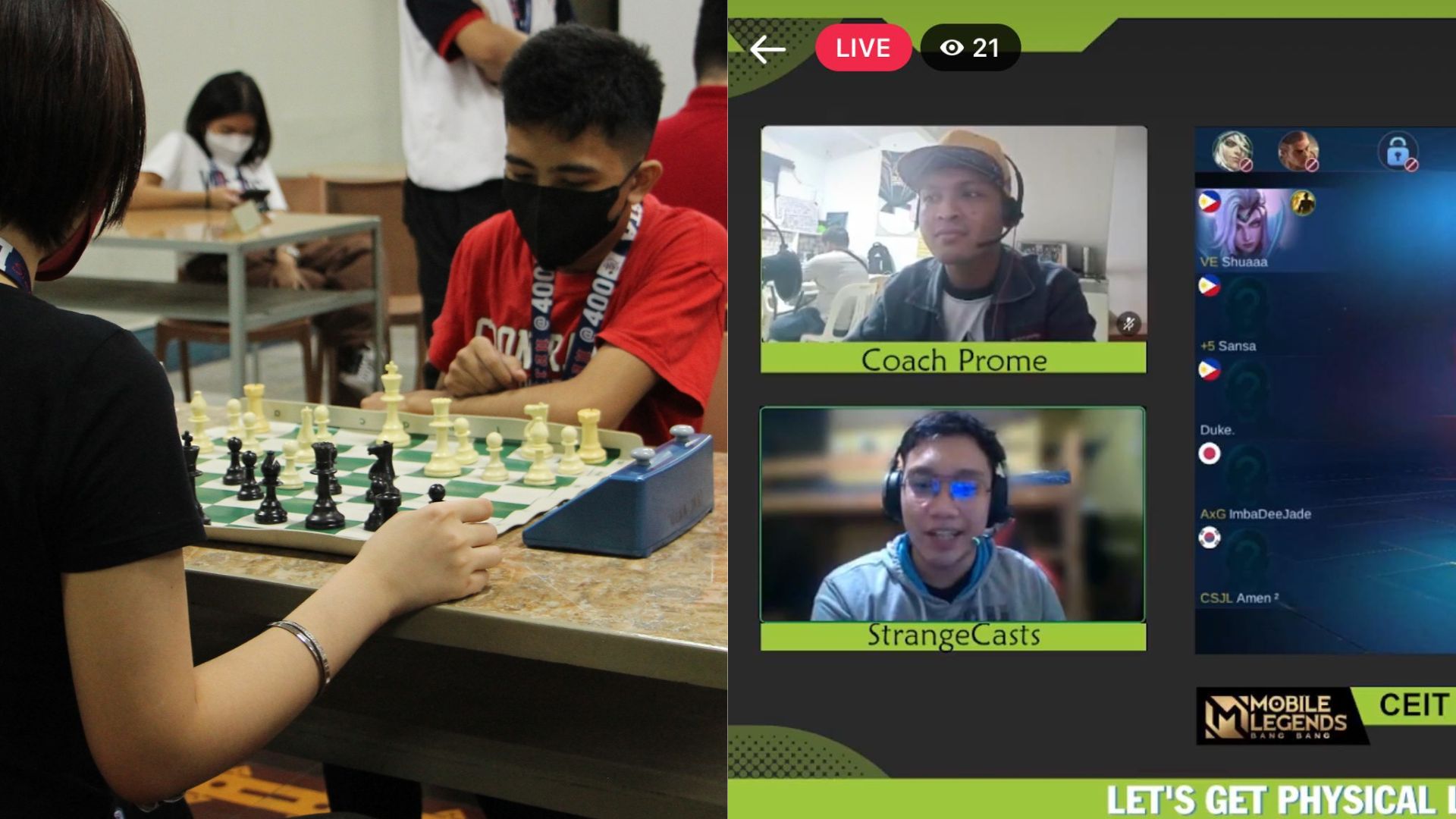 The battle of minds and a battle of skills. This sums up day one of the Letramurals 2022. Photo by Christelle Haro of The LANCE and the Letran Cyberknights Esports Society.

“MORE than the prize of winning, enjoy the prize of camaraderie,” this was one of the uttered lines by Asst. Prof. Catherine D. Sanchez, the Directress of the Department of Student Affairs in her remarks as she opened the LET’S GET PHYSICAL - Letramurals 2022 yesterday, October 25, 2022.

After being celebrated online over the pandemic, the Letramurals is now held onsite once again. The opening program of the collegiate intramurals was held at the SC Auditorium with Media Works’ Denise Surio and Teatro de Letran’s Kyle Abay-abay as the hosts. The introduction and question and answer portion of Mr. & Ms. Letramurals also took place at the said event, with Sofia Niña Cornejo and Rafael Marvin Yao representing CLAS, Erielle Pedernal and Gabriel Ross Cunanan for COED, Jhaime Lei Garin and Kyle Siglos carrying CBAA1, Julieanna Marie Soliman and John Leeroi Damalerio for CBAA2 and lastly, Mae Jaenielle Ibong and Gian Carlo Beringuel presented CEIT. The result of the pageant will be revealed on the last day of the intramurals, October 27.

CLAS emerged victorious in the modern dance competition as they performed with their NCAA-themed performance while COED placed second after performing their Final Examinations theme. CBAA2 settled for third, with the showcase of their moves inspired by the themes of Colegio Week/Paskong Arriba.

ESports once again have highlighted the Letramurals after teams from each collegiate team department participated in it. This year’s edition features different games such as Valorant, Mobile Legends, and Call of Duty Mobile.

In Valorant, there was quite a fight between the CLAS vs CBAA1. The match ended on a large score gap of 7-13 in favor of the CBAA 1. The 2nd game for Valorant which featured CEIT and CBAA2 led to a default as the CBAA2 did not show up, leaving CEIT to move up to the finals for their fight against CBAA1.

Moving on to CODM, CBAA1 managed to showcase their supremacy after beating CLAS, 2-0.

However, the match in the semi-finals was a different story. CEIT shut down CBAA1’s streak with a 2-0 whilst CBAA2, just like mobile legends, defeated COED, 2-0. The Finals are set to be between the CEIT vs CBAA2

Despite the lack of physical sports during this year’s Letramurals, Letranites still managed to showcase their skill, talent, and wit in two board game categories: Chess and Word Boggle.

Each competition had representatives from different teams from the CLAS, CEIT, CBAA2, and COED departments. However, CBAA1 failed to have players for both sports thus they were ruled out of the contest.

The Chess tournament was led by Mr. Marcelo Buen, who served as one of the Committee Chairpersons in yesterday’s festivities.

CEIT proceeded to sweep the fixture en route to the Championship as the team of Josh Erl Nada, Eivane Jacob Cruz, Gabriel Paolo Hortaleza, and Janzen Gabriel Angel all did their part to secure the gold. They were followed closely behind by team CLAS composed of Rosauro Gabriel Aque, Prince Lanz Archie Almazan, Aaron Porteza, and Hans Bennett Narag who bagged the first runner-up honors.

Over in the Word Boggle competition, Mrs. Jemlyne Romero, co-chairperson, supervised the event.

SCHEDULE OF EVENTS FOR DAY 2