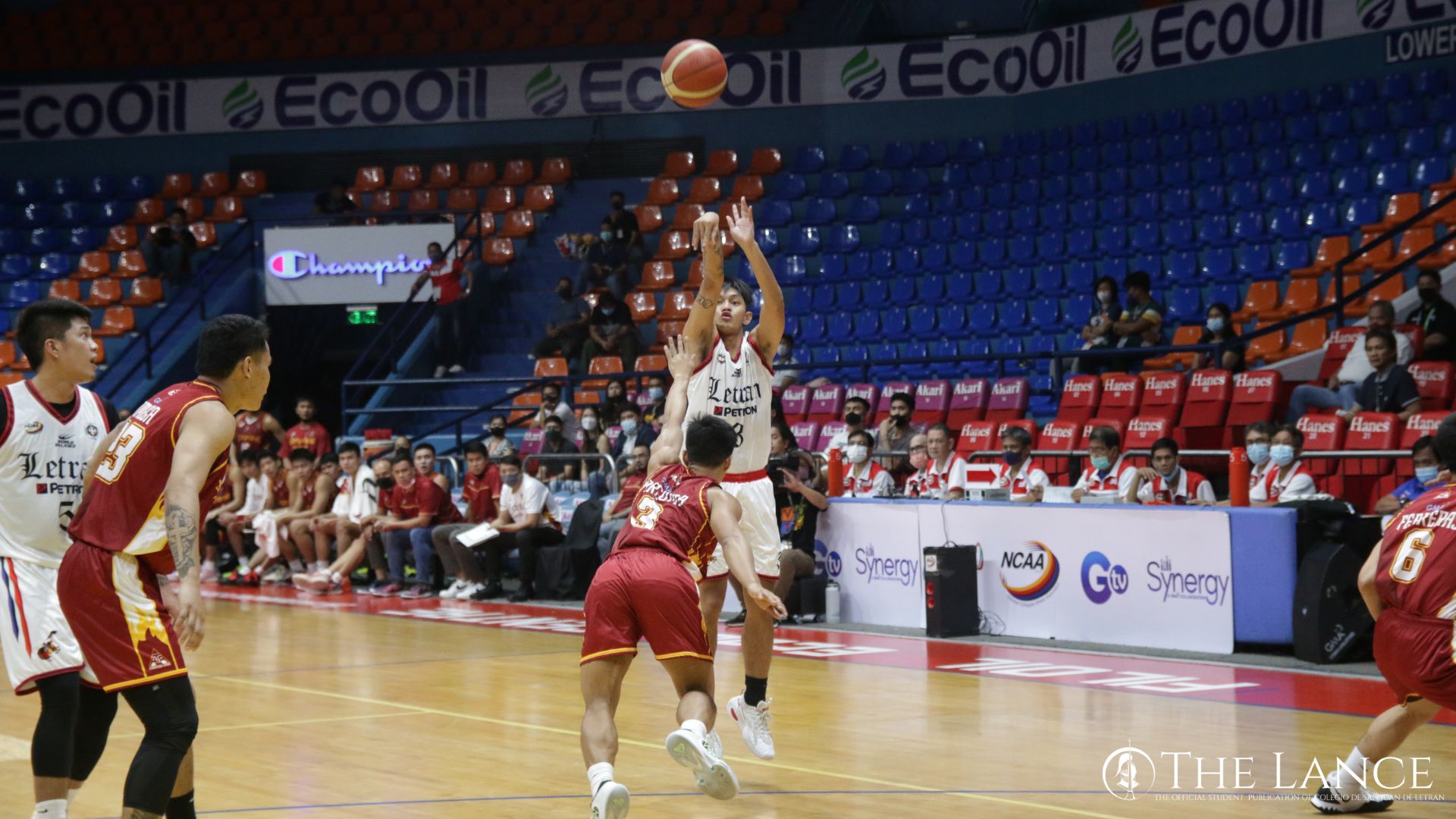 A skilled shot by the Letran Knights, one of many, against UPHSD's Altas, at the FilOil EcoOil Center. Photo by Thomas Villanueva Borja of The LANCE.

The Letran Knights kicked off the second round of the eliminations with a masterful performance against the Perpetual Altas, 74-59, in Season 98 of the NCAA Men's Basketball Tournament earlier today at the FilOil EcoOil Centre in San Juan.

Round two of Letran's matchup against the Altas proved to be a complete contrast to their previous game on October 8 where the two teams seemed inseparable after they went back and forth with Letran coming out on top, 70-67.

Defense was the name of the game for Coach Bonnie's squad, holding Perpetual to an abysmal 28.6% from the field and 7% percent from beyond the arc as they had full control of the lead from start to finish.

Letran asserted their dominance early with a seven-to-nothing run against the Altas spearheaded by their gritty work on the defensive end anchored by Fran Yu and big man Louie Sangalang.

With this being the case, Perpetual struggled early to find the bottom of the net as they were only able to muster up 11 points, trailing the Knights by 11 to end the quarter.

The grit shown by the Knights on defense however became a double-edged sword for them as they committed shooting fouls after shooting fouls that the Altas promptly converted to get back into the contest.

Letran's 12-point lead was trimmed to as close as three points led by Altas’ Cedrick Abis and Jelo Razon, both players put up seven markers for the Altas to close the half, 37-32.

It was much of the same story in the third quarter with Letran continuing their aggression on both ends of the floor after they added to their lead, 50-40, heading into the final quarter of play.

The Intramuros-based squad came out with a purpose in their effort to widen the gap even more as they proceeded to go on another 7-0 run with buckets from Tommy Olivario, Sangalang, and Brent Paraiso.

UPHSD failed to match the Knights' defensive prowess, giving up basket after basket as Letran led the game by as many as 28 at one point.

With the game in the bag, Coach Bonnie decided to insert his third-stringers into the game composed of a bunch of rookies.

Barcuma and Razon saw this as an opportunity to trim the deficit as they went ahead and dropped a quick 14 points but it was too little too late with the game eventually concluding, 74-59.

Paraiso was a stable force for Letran, scoring 16 points to go along with 7 rebounds. Sangalang bounced back from his subpar performance against EAC with a double-double of 10  and 10, followed by a solid game from Paolo Javillonar who dropped 8 points and 12 rebounds.

Razon led the way for his team with 13 points and 3 steals, Barcuma also had 11 of his own, while Abis and Marcus Nitura had 7 markers each.

In an interview, Coach Bonnie Tan reflected on his excitement with this being their first double-digit win of the season and lauded Sangalang's showing.

He anticipates that teams would become more challenging to face in the second round, expecting teams to take the last couple of games more seriously.

Barring any protocol-related issues from the Arellano University Chiefs, Letran's match-up against the Chiefs will be on Friday, October 21 at the FilOil EcoOil Centre in San Juan at 3 PM.

AU's scheduled matchup against San Beda earlier today was moved to a later date after 2 players from the Chiefs tested positive for COVID-19.