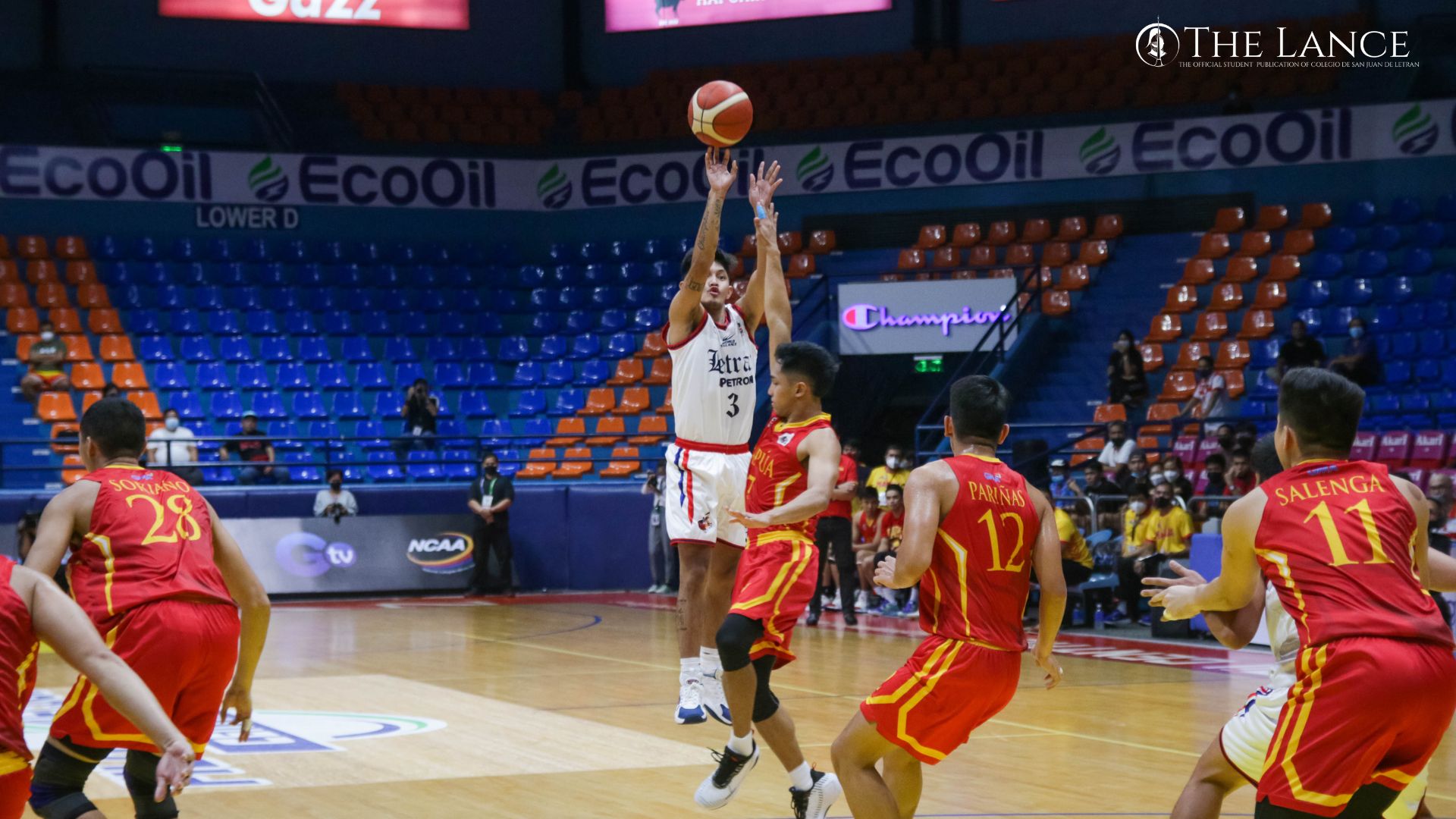 The Letran Knights in a spectacular skills bout with its last year's championship rival, the Mapua Cardinals at the FilOil EcoOil Sports Complex. Photo by Thomas Villanueva of The LANCE.

The three-peat-seeking team builds their momentum with a 3-1 win-loss record, while Mapua plummets down with a 1-4, win-loss slate

Fran Yu paced the Knights with 15 points, five assists, and three steals. Along with him were Paolo Javillonar and King Caralipio who tallied 14 and 8 markers of their own.

It was a low-scoring first quarter for both teams with both having a hard time taking the lid off the rim as they played tough defense on both ends of the court.

The Knights did not have a single field goal not until Paolo Javillonar scored a lay-in at the 2-minute mark of the quarter. It was then a better scoring show for Letran on the second, signaled by two consecutive early threes by King Caralipio.

It was at the 6th-minute mark when Letran took their first lead by a 19-footer from Fran Yu.

The Cardinals on the other hand were able to put up three bombs from beyond the arc catching up with the improving run made by Letran, ending the half 32-33.

A late momentum build-up went in the third quarter where the Knights and Cardinals both found their rhythm through pretty passing and plays off the screen.

Meanwhile, Jasper Salenga was ousted early in the fourth quarter with his team missing his help on both ends.

A massive 12-0 run was made by Letran mid-fourth led by Fran Yu from the outside and Paolo Javillonar on the inside helping them to put up a double-digit margin.

The momentum was cut after an unsportsmanlike call on Brent Paraiso as he was thrown out of the game, hitting Nocum on the back of his head with an elbow.

Despite the run, crucial turnovers for the Knights led to points for the Cardinals cutting the lead to 2 in under one minute.

A limping Fran Yu scoring a 30-foot dagger three upped the lead of Letran to 5 with 46 seconds to go, regaining the momentum for the Knights to hold on for the win.

Letran will face their rivals, the San Beda Red Lions, the only team Mapua has squashed this season on Friday, September 30, 2022. Game time is at 3 PM live at the FilOil EcoOil in San Juan and on GTV.