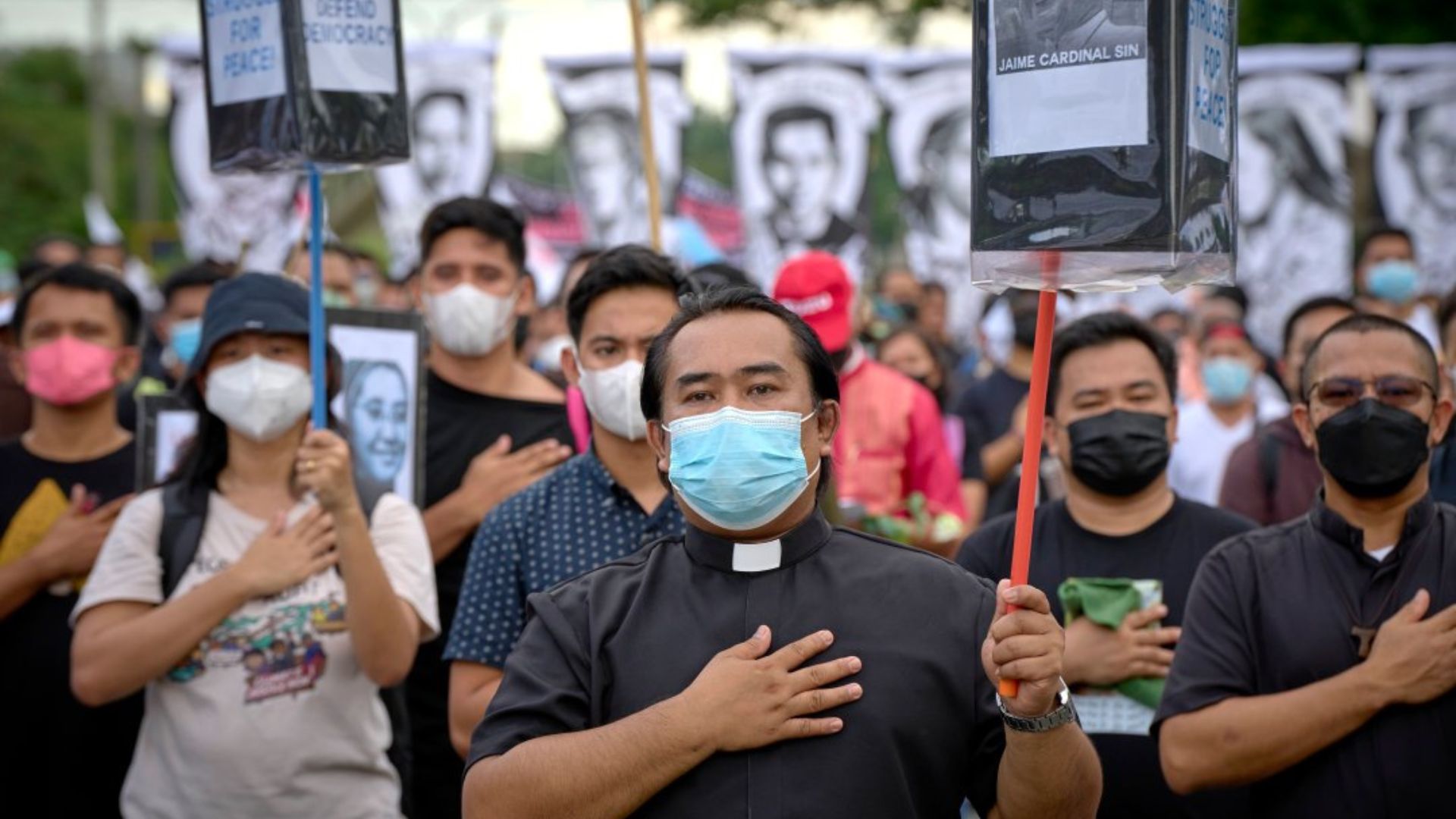 During the 50th Anniversary celebration of Martial Law, a priest and a group of church activists sang the national anthem. Photo from: Crux

To commemorate the 50th year since the declaration of Martial Law on Wednesday, September 21, 2022, Church leaders gathered as they prayed for the priests, pastors, and other members of the clergy who were victims of the Marcos dictatorship.

In September 1972, Ferdinand Marcos Sr. declared Martial Law in the country, giving him control over the military and executive and legislative branches. It is to suppress a supposed communist takeover, but civilians became victims of this brutal display of power from a leader. The dictatorship lasted for 20 years.

The catholic church has fought vigorously against the brutality showcased by the authorities toward regular civilians and members of religious groups alike since the early years of the imposition of martial law.

Many were tortured, killed, and countless people disappeared without a trace. With that, members of the church have paid their homage to those victims on the 50th anniversary of the imposition of martial law,

The gathering took place less than three months after Ferdinand “Bongbong” Marcos Jr. won by a landslide in the 2022 National Elections. As arrests and repression rise with the implementation of the Anti-terrorism act of 2020, both church leaders and workers fear the worst as there is an impending repeat in the country's history.

Retired Cagayan de Oro Archbishop Antonio Javellana Ledesma said in an interview, “Throughout the years of the martial law, the Christian churches were very active, and many of our people were harassed and persecuted. We’re here today to remember them.”

The archbishop added that their goal is to make other people aware of the potential risks of the Martial Law’s return. He also stated that “preventive action now is better than repenting about it later on.”

Father Oliver Castor said in an interview during the protest, “Now that we have another Marcos in power, there are sectors that want to erase from our historical memory the situation under martial law, those two decades of dictatorship. If we don’t learn from history, the state will revise history and dilute the struggle of the Philippine people for democracy.”

Father Castro is a redemptorist priest and a member of the Rural Missionaries of the Philippines, which recently had 16 members charged with supposedly financing terrorist activities.

“Any apparent conflict between the exigencies of security and of the citizens’ basic rights must be resolved according to the fundamental principle — upheld always by the Church — that social organization exists only fοr the service of man and for the protection of his dignity, and that it cannot claim to serve the common good when human rights are not safeguarded,” (Pope John Paul II, 1981)