VIVA SEÑOR NAZARENO: A brief history of the Feast of Black Nazarene 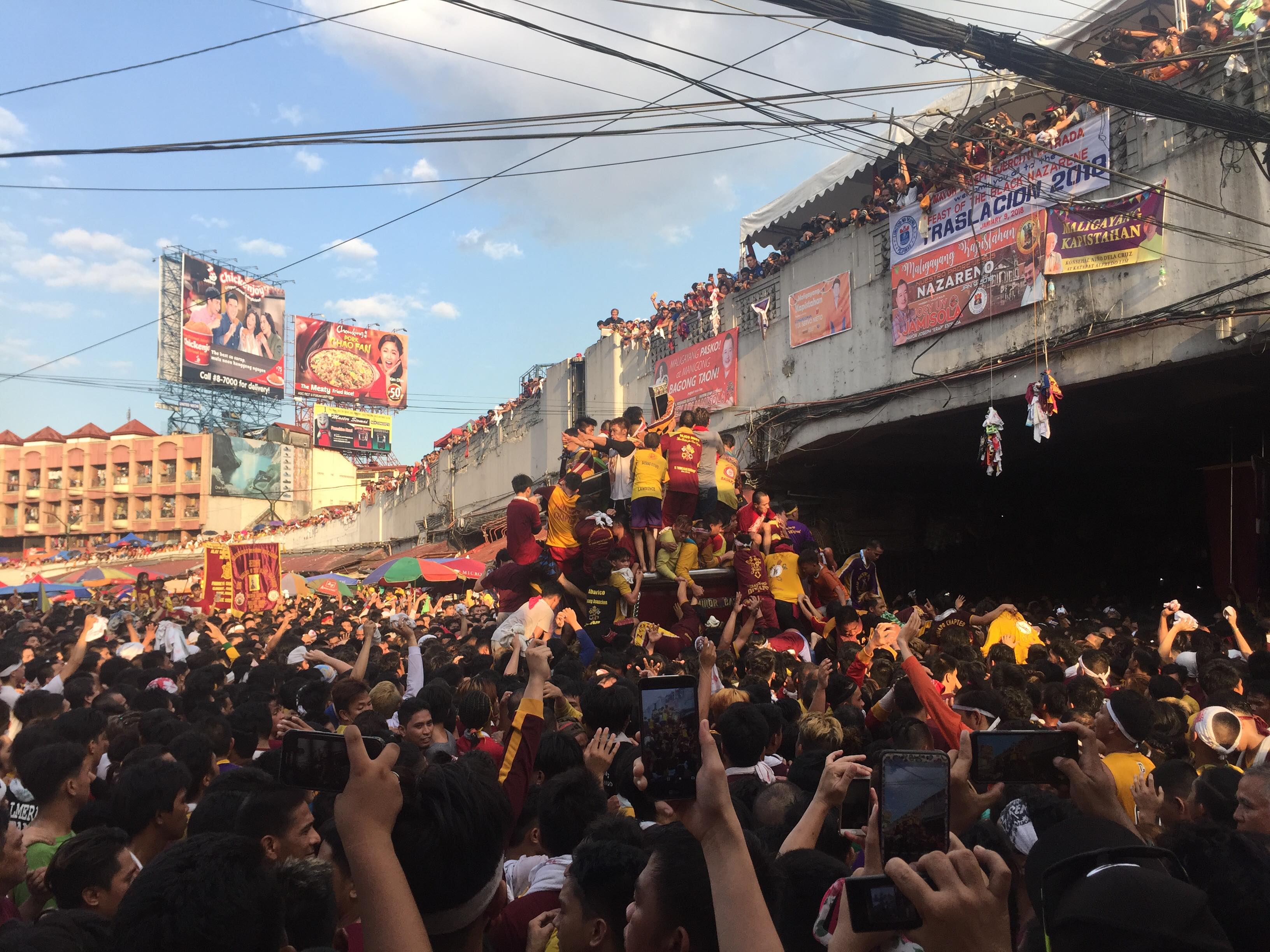 Hundreds of devotees swarm the streets and wave their handkerchiefs and towels as the andas (carriage) bearing the image of the Black Nazarene passes through Binondo earlier. Photo by JR Padlan.

In hopes of being bestowed a miracle, thousands of Filipino devotees have gathered today in celebration of the feast of the Black Nazarene. Families and individuals joined the transferring of the image from its old home in Intramuros to the Minor Basilica of the Black Nazarene in Quiapo, Manila, carrying old pictures and statues of Jesus Christ, all trying to kiss, touch, or rub all throughout the procession.

The image of the Black Nazarene is brought out to public three times a year, and is also referred to as “Nuestro Padre Jesus Nazareno” or “Senor.” Which devotees have said to be miraculous, thus, the swarm of people joining the procession.

The procession started at the Quirino Grandstand, and earlier, some devotees flocked and practiced the kissing of the Black Nazarene, also known as the “pahalik.” The known religious occasion is held every 9th of January, and every year, devotees swarm the streets in their maroon-colored shirts, waving handkerchiefs to show their unwavering faith.

Usually, the entire event lasts for 22 hours or more, but that is not a hindrance for the devotees who partake in the event. Organizers have estimated around 15 million people to join, based on past processions. (Over the years, there have been casualties mid-procession.)

Measures have been taken to have a peaceful procession. The Philippine National Police have proclaimed the banning of using guns around the area. People living in the area are expected to pay their respects, with the liquor ban, if they aren’t going to participate in the event.

The procession has been a life-long tradition for some and will continue to be as long as their faith remains steadfast. The image is already in its 410th year, and has thus seen through many events in Philippine history:

1606 –The Black Nazarene, an image of Jesus Christ carved in dark wood was brought to the Philippines by Augustinian Recollects. The image was first housed in the Recollect church in Bagumbayan under the patronage of Saint John the Baptist.

1608 – The image was transferred to the Church of Saint Nicolas de Tolentino, also known as “Recoletos Church” in Intramuros.

1645 and 1863 – The image survived earthquakes that shook Manila and nearby provinces.

1650 – Pope Innocent X recognized the lay Confraternity of Santo Cristo Jesus Nazareno for the acknowledgment of the devotion of Filipinos to Jesus Christ through the Black Nazarene.

1787 – The image was transferred to Quiapo Church. It is later celebrated as Translacion by means of the procession from its original home in Church of Saint Nicolas de Tolentino (outside Rizal Park) to the Quiapo Church.

1945 – The image survived the bombing of Manila during World War II.

1988 – Canonically known as Saint John the Baptist Parish, the church was also called the Minor Basilica of the Black Nazarene.

1998 – A replica was used in the procession due to the damaged sustained by the original. The original imaged is housed inside the church.

Through the years, the Black Nazarene remains a famous icon that attracts many devotees from different parts of the country. The scores of devotees flocking to the Capital today are but a glaring indication that Filipinos, with enough prayer and perseverance, are capable of enduring any volume of hardship to express one’s devotion.