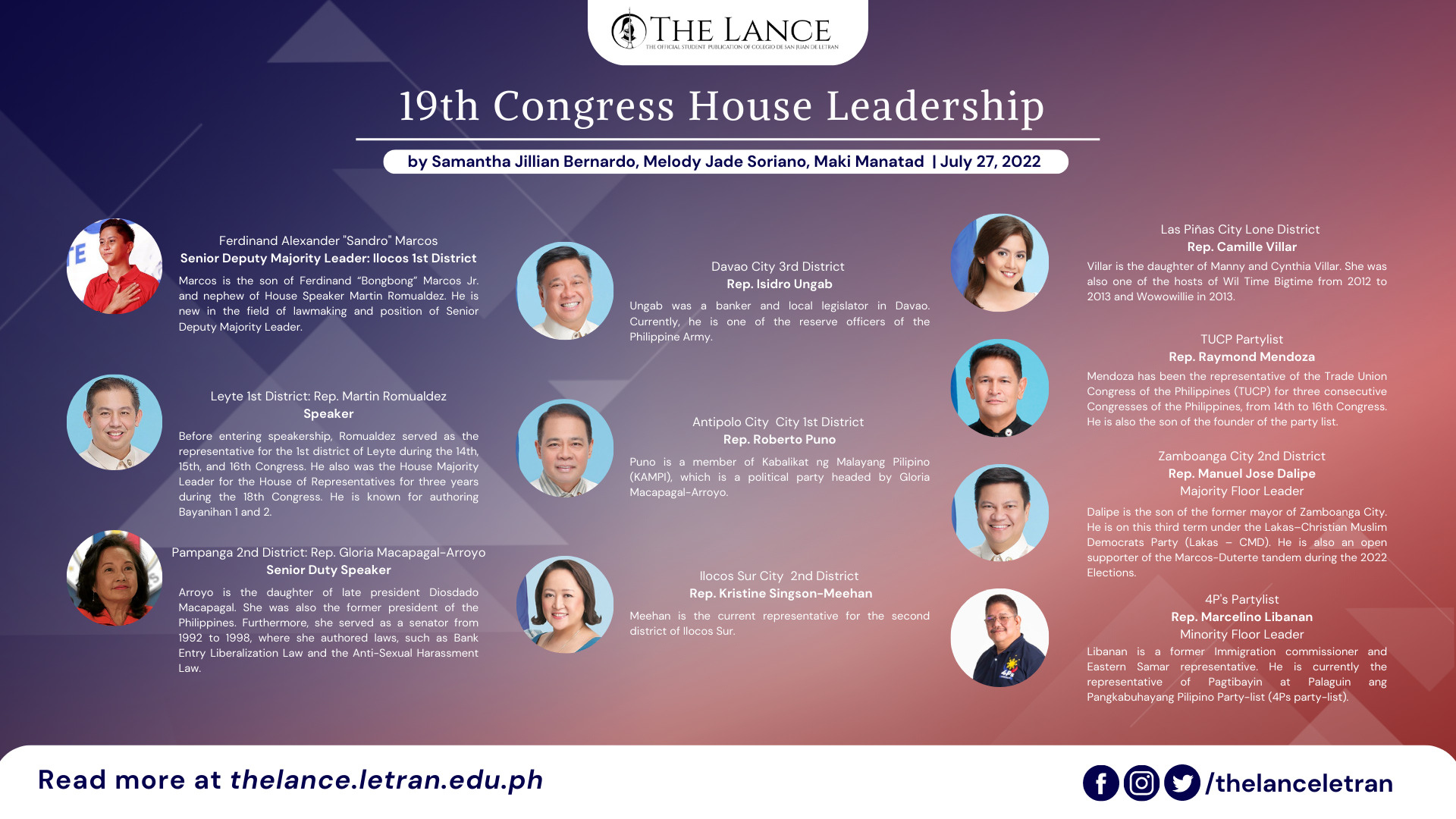 The 19th Congress of the Philippines welcomed its new set of officials on Monday, July 15, 2022, the same day as President Marcos’ first State of the Nation Address (SONA). The list of the elected officials is as follows:

THE 19TH CONGRESS OF THE SENATE

Before securing the highest post in the Senate, Senator Zubiri served as the Majority Leader in the 14th and 17th Congress. His leadership in the majority post led him to pass 650 bills and other significant legislation, including the Bangsamoro Organic Law and many other important laws.

Four-term senator, now Senate-President Pro Tempore, Senator Legarda was the first to file priority bills seeking the betterment of the country's education and livelihood system. With her experience in the legislation, she advocates for causes such as pioneering laws for the environment, promoting the welfare of Filipino women and youth, and protecting indigenous people's rights.

As the former chairman of Tesda and an advocate of labor rights and skills training, Senator Villanueva hopes to continue what he had started serving as the Senate's majority leader for the 19th congress. The re-elected senator is known for authoring bills focusing on labor, employment, and Human Resources development to produce more jobs and improve the technical vocational sector.

From being an ally of the past administration to now leading the Minority bloc of the Senate, Senator Pimentel aims to sustain its critical stance on issues with the ruling supermajority. With years of authoring and co-sponsoring bills regarding local government, his focus on the senate centers on justice and human rights.

THE 19th CONGRESS OF THE HOUSE OF REPRESENTATIVES

Arroyo is the daughter of late president Diosdado Macapagal. She was also the former president of the Philippines. Furthermore, she served as a senator from 1992 to 1998, where she authored laws, such as Bank Entry Liberalization Law and the Anti-Sexual Harassment Law.

Ungab was a banker and local legislator in Davao. Currently, he is one of the reserve officers of the Philippine Army.

Puno is a member of Kabalikat ng Malayang Pilipino (KAMPI), which is a political party headed by Gloria Macapagal-Arroyo.

Meehan is the current representative for the second district of Ilocos Sur.

Villar is the daughter of Mark and Cynthia Villar. She was also one of the hosts of Wil Time Bigtime from 2012 to 2013 and Wowowillie in 2013.

Dalipe is the son of the former mayor of Zamboanga City. He is on this third term under the Lakas–Christian Muslim Democrats Party (Lakas – CMD). He is also an open supporter of the Marcos-Duterte tandem during the 2022 Elections.

Libanan is a former Immigration commissioner and Eastern Samar representative. He is currently the representative of Pagtibayin at Palaguin ang Pangkabuhayang Pilipino Party-list (4Ps party-list).

Marcos is the son of Ferdinand “Bongbong” Marcos Jr. and nephew of House Speaker Martin Romualdez. He is new in the field of lawmaking and the position of Senior Deputy Majority Leader.