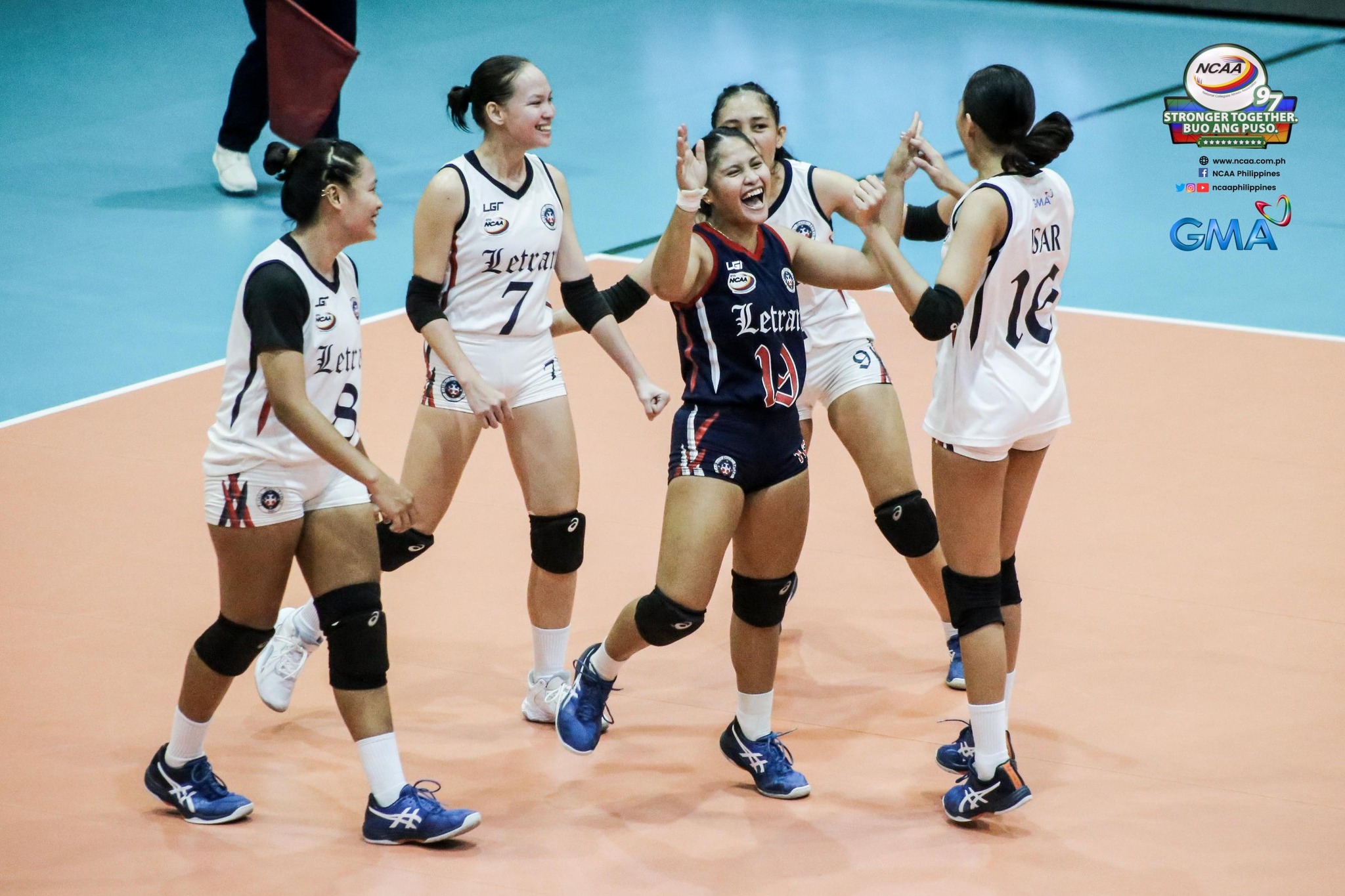 The Letran Lady Knights filled with spirit despite their loss against San Sebastian's Lady Stags on July 10, 2022 at the Paco Arena. Photo courtesy of the NCAA & GMA.

The Colegio de San Juan de Letran Lady Knights bowed down in a sweep against the San Sebastian Lady Stags, 25-15, 25-22, 27-25, in their season-ending game of the 97th edition of the NCAA at the Paco Arena earlier today.

The Lady Knights seemed manhandled in the first set as they trailed by as much as ten points in the opening salvo, 12-2. This was before Shereena Urmeneta led Letran in charging a seven to two scoring barrage. However, it wasn’t enough to contain the Lady Stags’ strong start as they ended the set still with a double-digit deficit.

On the other hand, the second set became a much more interesting fight with Letran starting on a 3-0 run behind Edma Musngi’s back to back service aces. San Sebastian then scored five straight to capture the lead for good. The Lady Knights had an unfavorable amount of unforced errors in the set with 10 while Baste had 5.

The thrill of the game continued to the third set with Letran refusing to go down without a fight. San Sebastian went up by as much as nine points early on but the ever-so-resilient Lady Knights managed to even force a deadlock at 24.

Emerging star Julienne Castro delivered timely blows at the crucial parts of the third set to keep the Lady Knights’ hopes alive. Unfortunately, this fell short with Reyann Canete ending the match through a spike.

The Lady Knights showed glimpses of their good team defense with a number of timely blocks courtesy of new addition Natalie Estreller who finished with 7 points. Musngi was also impressive with 5 points in 5 service aces.

For San Sebastian, it was the Kath Santos and Reyann Canete show. The scoring duo carried the team on their shoulders as they outscored the entire Lady Knights, 18 to 14, in attack points during the second set alone. Canete was hailed player of the game with 15 total markers. With the win, the Lady Stags now sits alone as the third seed and will move on to the final four.

This game puts the Lady Knights in a 2-7 win-loss posture to cap off their season. And though they were unable to crack the playoffs, it was surely a season full of learnings for this rebuilding team. Arriba, Lady Knights!