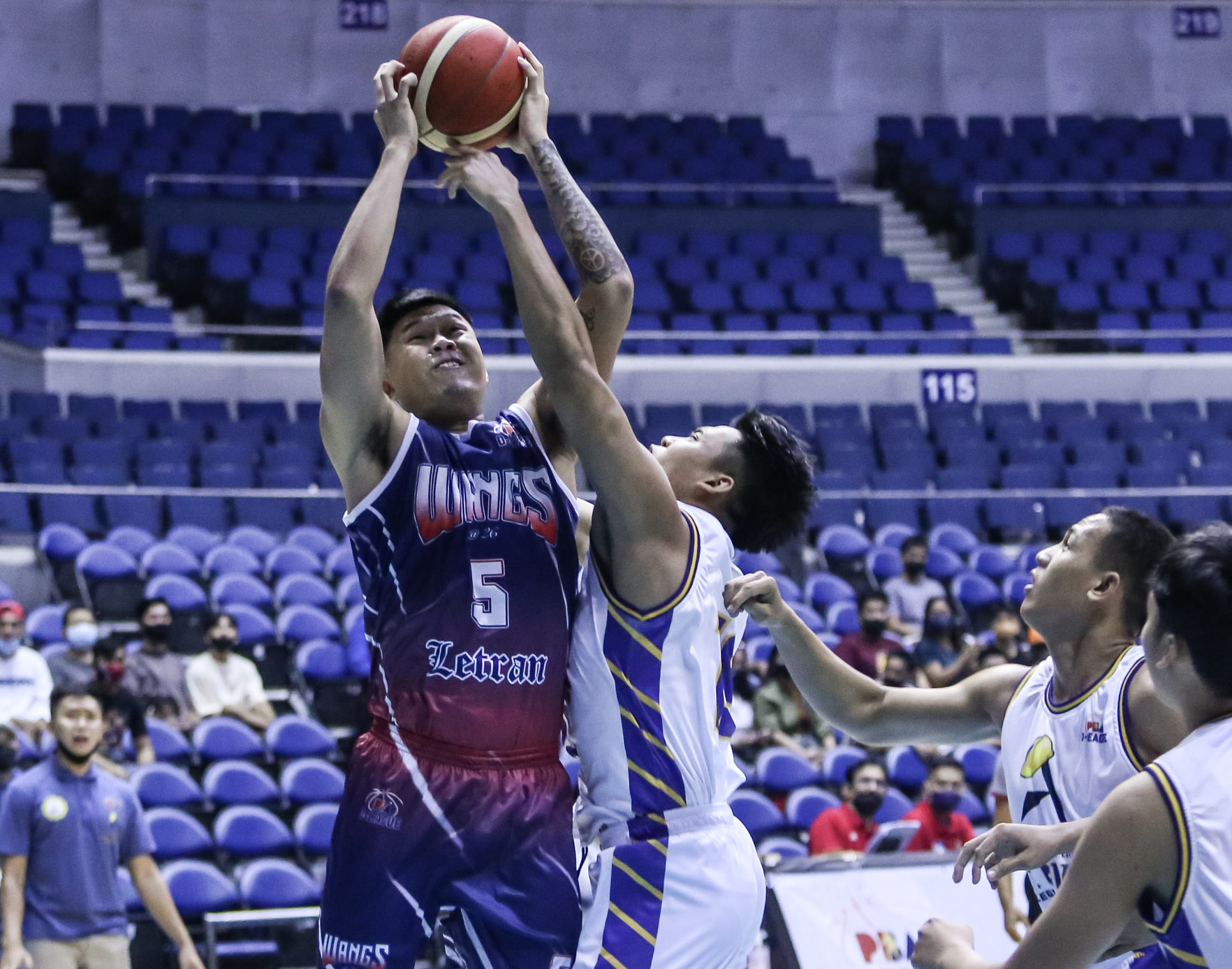 The Knights on an impressive showing against St. Claire on July 07, 2022 at the Araneta Coliseum. Image courtesy of the PBA.

STILL CAME OUT WINNING - As up-and-down of a game it was, Wangs @26 – Letran overcame Adalem Construction-St. Clare during their match-up at the opening of the 2022 PBA D-League Aspirants’ Cup earlier today, 94-87.

Letran came in blazing hot to start the game as forward King Caralipio imposed his presence over his St. Clare counterparts, scoring 6 quick points in the shaded area early in the opening frame. Letran Bigs Louie Sangalang and Paolo Javillonar on the other hand stood tall like they always do, punishing the reigning NAASCU Champs on both ends of the floor. The Knights ended the first quarter on a high note with a Brent Paraiso triple from near half court.

The Knights seemed like they were on cruise control as their lead in the 2nd frame grew bigger and bigger, even reaching 23 at one point. Kobe Monje, Kyle Tolentino, Neil Guarino, Ira Bataller, and Jimly Lantaya all got their feet wet, getting significant minutes as Letran was obviously fielding in new lineups and combinations to fill the absences of recent NCAA Finals MVP Jeo Ambohot and starting wing Allen Mina who are both now in the pros. Monje made a lot of heads turn towards him with his impressive outing, dropping a solid 17-6 game.

This is when things started to get ugly for Wangs-Letran though, as their turnovers and fouls piled up, allowing St. Clare to get 29 free throw attempts only in the first half.  The once 23-point lead was gone in a matter of minutes, with the first half ending at 51-38.

Even if they were still up throughout the 2nd half, the Knights continued their struggle to limit their turnovers and fouls which opened the opportunity for Adalem Construction to further cut the deficit. St. Clare gained momentum and hit three after three, even closing in on Letran, 85-88, in crunch time. Making things worse for Letran, Paraiso, who was having an all-around game and served as their primary ball-handler, fouled out late in the fourth.

Clutch Caralipio then stepped up and hit a huge 3 with only 47 seconds left in the game, creating a comfortable 6-point cushion and eventually sealing the win for the 2022 NCAA Champions.

Sangalang was in his usual self, scoring 21 points, grabbing 11 boards, dishing 4 assists, and getting 2 shot blocks. Paraiso provided a sense of stability for Letran with his 12 points, 8 assists, and 4 rebounds. Clutch-man Caralipio also got 12 points of his own, including 6 rebounds and 2 assists.

Star guard Fran Yu and reigning ROY-MVP Rhenz Abando did not suit up for the Knights earlier.

Letran looks to continue their winning ways and will face AMA Online next on July 12, 1PM, at the Ynares Center in Pasig City. Admission to all PBA D-League games is free.