President Ferdinand Romualdez Marcos Jr.; Now on the Highest Seat of the Nation 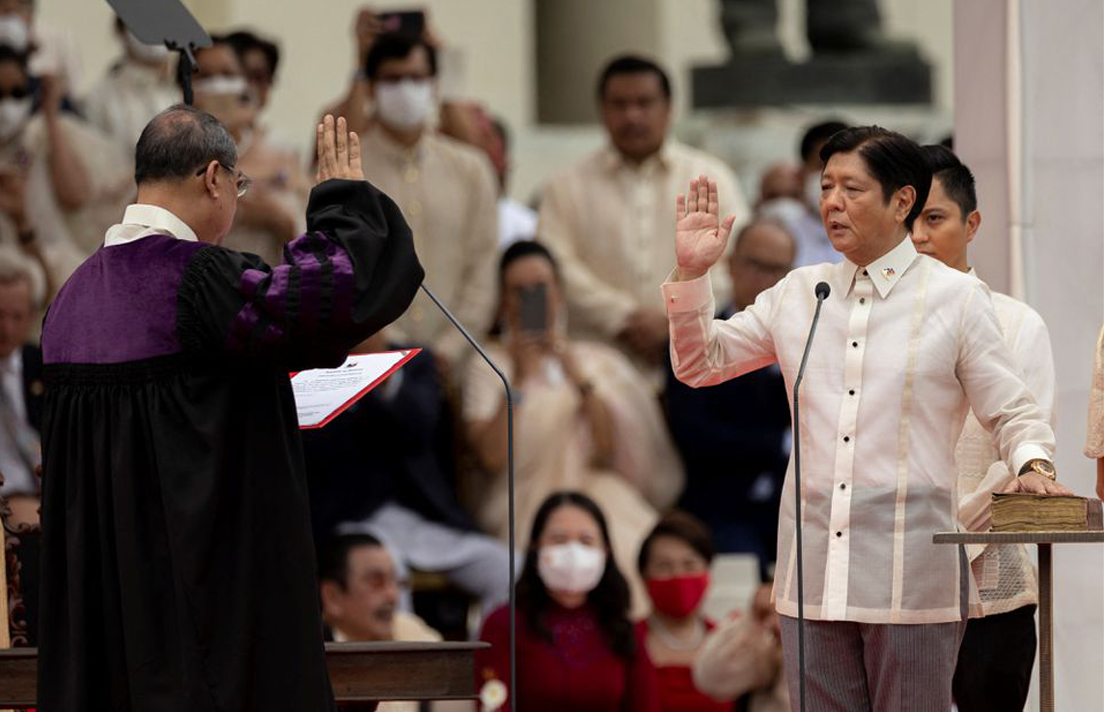 President Ferdinand Marcos Jr. Receiving his oath of office from Chief Justice of the Supreme Court, Alexander Gesmundo on June 30, 2022 at the National Museum of Fine Arts. Photo is courtesy of Reuters.

President Ferdinand Romualdez Marcos Jr. was declared the 17th President of the Republic of the Philippines at his inauguration held at the National Museum of Fine Arts on Thursday, June 30, 2022.

Joined with his family and close relatives, Ferdinand Marcos Jr. swore to the country that he would uphold the constitution and serve its people selflessly as President during his recitation of the oath of office delivered by the Chief Justice of the Supreme Court, Alexander Gesmundo.

A 21-gun salute followed shortly after the completion of the oath-taking, wherein the Military Bands performed four flourishes and ruffles. The Presidential anthem, “We Say Mabuhay," was performed, followed by the Presidential honors music entitled “Marangal na Parangal” to conclude the historic moment.

In the President’s inaugural speech, he thanked his supporters and the Filipino people. "This is a historic moment for us all," he said. "You picked me to be your servant to enable changes to benefit all. I fully understand the gravity of responsibility you put on my shoulders. I do not take it lightly, but I am ready for the task."

He also praised his father, former President Ferdinand Marcos, stating that his father  “got it done. Sometimes with needed support, sometimes without. So will it be with his son”  Marcos jr. assured his supporters. Many critics are anxious to see if the Tiger of the North has what it takes to get the nation back on track.

The officer in charge of the inaugural security, Lt. Gen. Vicente Danao Jr. previously stated on June 27, “Our mantra is not to curtail the freedom of expression and the right to peaceably assemble, but the same constitutional rights should not be abused leading to acts of violence and disorder.”

Despite the Philippine National Police’s (PNP) highly militarized and forceful posture, several peaceful protests took place around the permitted and historical areas of the vicinity. Protesters include victims of the Martial law and the Bayan group led by Secretary-General Renato Reyes Jr. who took their oath to safeguard the state from tyranny that may arise from the new administration.

President-elect Marcos met with former President Duterte for final remarks and departure honors earlier in the day before attending the inauguration. Upon arriving at the Malacanang Palace after the event, he swore in the members of the cabinet, thus, activating a new administration that has its plate full of challenges plaguing the country.