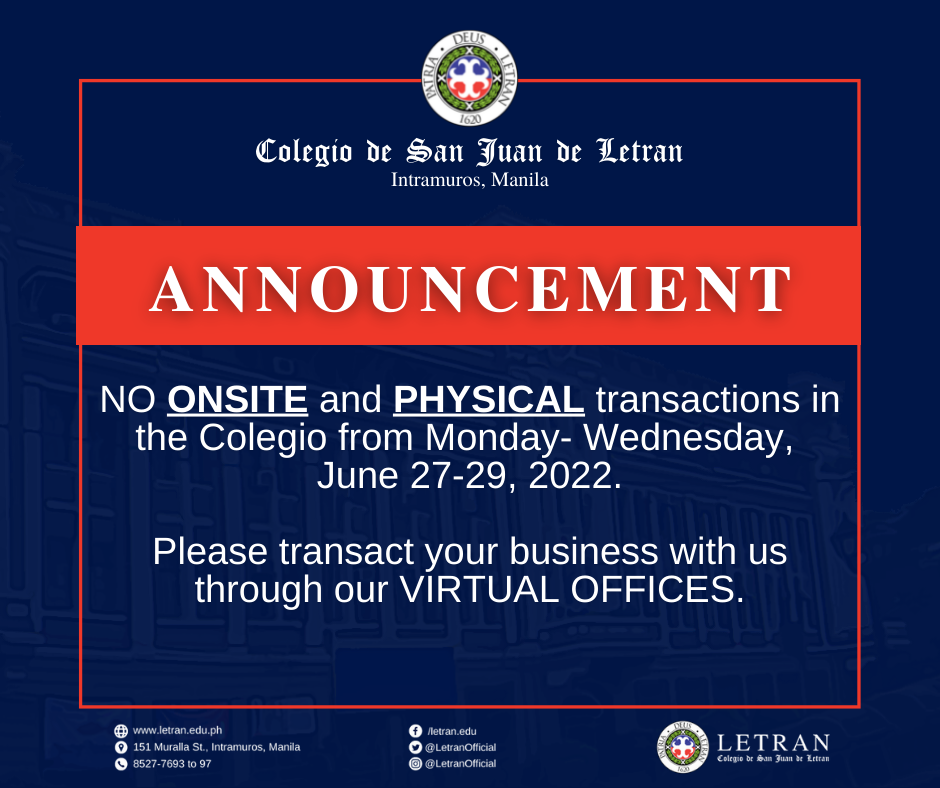 Colegio de San Juan de Letran announced on Saturday, June 25, 2022, that on-site and physical transactions are temporarily halted due to some road closures for the inauguration of the 17th President of the Philippines.

They announced via their official Facebook page that the Colegio will not accept any on-site and physical transactions from Monday to Wednesday, June 27 to 29, 2022. They also stated that they will implement a full work from home set-up which indicates that all virtual offices will operate during the mentioned dates to accept any online transactions. The virtual offices are open from 8 am to 5 pm.

The road closure ranges from Ayala Boulevard to Taft Avenue, and a re-routing plan is also released by the Metropolitan Manila Development Authority (MMDA). The Presidential Inauguration will take place on Thursday, June 30, 2022, on the historic grounds of the then Old Legislative Building, now National Museum of Fine Arts. The venue was last used as inauguration site last 1946 by Manuel A. Roxas.

According to the National Capital Region Police Office (NCRPO) about 15,213 personnel are dispersed among the area to ensure the safety of the president-elect and attendees. Rallies are only allowed on the premises of the National Museum only if they are cheering “Mabuhay,” Lt. Gen. Vicente Danao Jr. said during a press briefing at Camp Crame on Monday, June 13, 2022.

According to Bayan secretary-general Renato Reyes, Gen. Danao wants not only to regulate the right to peaceably assembly but also the content of the assembly. “Our bill of rights does not discriminate whether an assembly is in favor or critical of the government. Civil liberties are guaranteed whether you are in favor or critical of the government,” Reyes said in an interview with the Inquirer.