Still in Shining Armor: Letran Escaped The Altas’ Scare, Charges to the NCAA 97 Finals With an Unblemished Record. 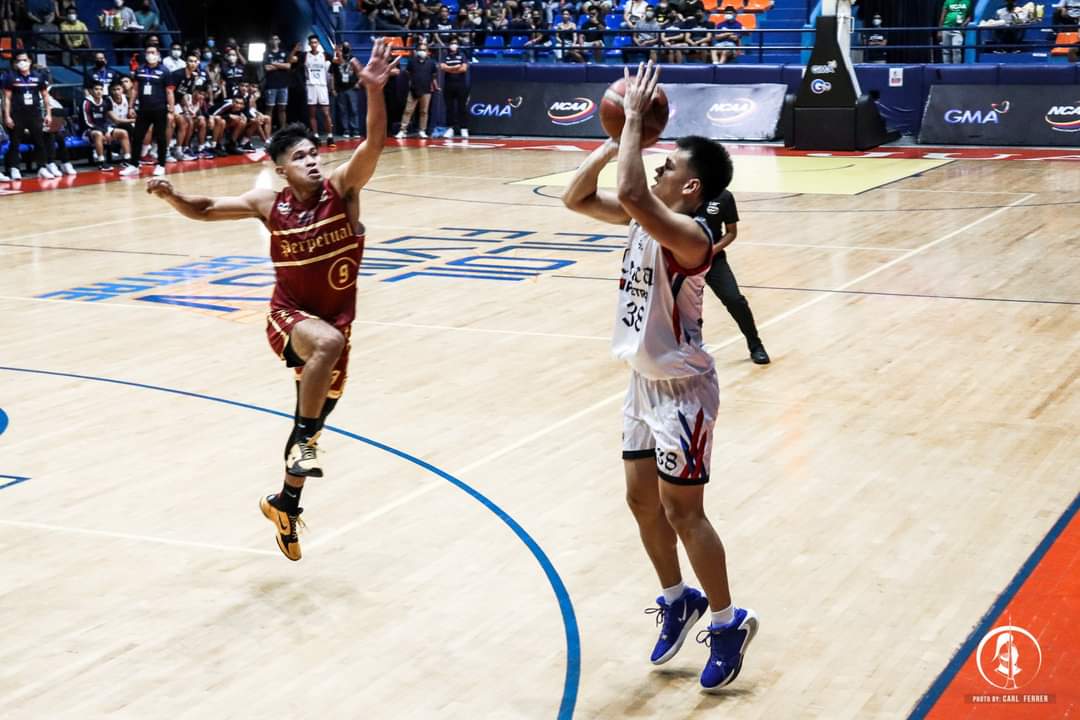 The Knights attempted to immediately utilize their outside shooting during the first few minutes of the ball game, but the hot afternoon was too cold for them. Nevertheless, they were able to control the boards with the presence of Jeo Ambohot, who bagged 14 points and 14 rebounds.

On the other hand, the Altas were gutsy enough to pound Letran with their outside shots, all thanks to the combined efforts of Cris Pagaran and JP Boral.

However, the half would end in favor of the Maroon coated squad, ending it with a 39-36 lead.

In the second half of the match, the Knights found a way to peel off the pesky defense of the Atlas when the shining superstar of the Knights, Rhenz Abando, punished the Atlas with his arsenal of three-point shots, including two blockbuster dunks, one coming from an “alley-oop” pass.

The Knights held the advantage, especially when the Atlas had their fifth team foul after four minutes of the third quarter, bringing them to the penalty stage. Thus, the Knights were able to hold onto their lead by nine.

It was a third quarter storm for the Knights, ending it with a score of 62-55.

But, Perpetual has something up their sleeves, causing Letran to discover their "Achilles heel."

In the final quarter of the match, the Knights were immediately placed in a penalty situation in the early four minutes, similar to what happened to the Atlas in the third.

Down by eight points, 66-58, the Atlas took advantage of the Knights’ penalty situation by cooking a 13-5 run.

But the Knights were not over with the Atlas. Litting up the arena with the "Arriba Spirit," the sensational point guard, Fran "Mr. Frantastic" Yu, made two crucial shots in the last minutes of the game.

Letran had a commanding 76-75 lead in the game when suddenly a foul was called against the Knights, and two crucial free throws were awarded to Perpetual’s Mark Omega.

Unfortunately for the Atlas, these free throws went out, and the Knights charged for their scoring opportunity.

In the most palpitating moments of the game, the former University of Santo Tomas Growling Tiger, Brent Paraiso, missed a wide open layup that could have given the Knights a comfortable lead. On the other hand, Pagaran also missed a crucial jumper that could have brought the Atlas ahead.

This gave Letran an opportune possession, with only 8.6 seconds remaining on the game clock. At this point, Yu received the ball and was fouled, giving him a chance at the charity stroke. Yu makes one of the two awarded free throws, putting Letran up by two, 77-75.

In the dying seconds of the game, Razon confidently made a last-ditch attempt, but was unable to capitalize. Omega attempted to score, but Ambohot was big and quick enough to block the shot.

Overall, it was a close-call matchup between the two collegiate teams—no sign of a major pull from either team.

From the Letran side, it was Abando who became the ultimate rescuer, finishing with 24 points, shooting 9/16 (56%) from the field, including three triples. He also tallied three rebounds, two assists, two steals, and a solid block.

Still, there is no shame in how Perpetual got into this spectacular series. They survived three knockout games, from both the elimination and play-in rounds, before securing their spot in the Final Four.

They also had to compromise with the loss of Kim Aurin, who had to miss two games, including the Final Four, due to contracting chicken pox.

The Knights now secured a spot in the NCAA Season 97 Men’s Basketball Finals, which will be held this Sunday, May 15, at the FilOil Flying V Arena.