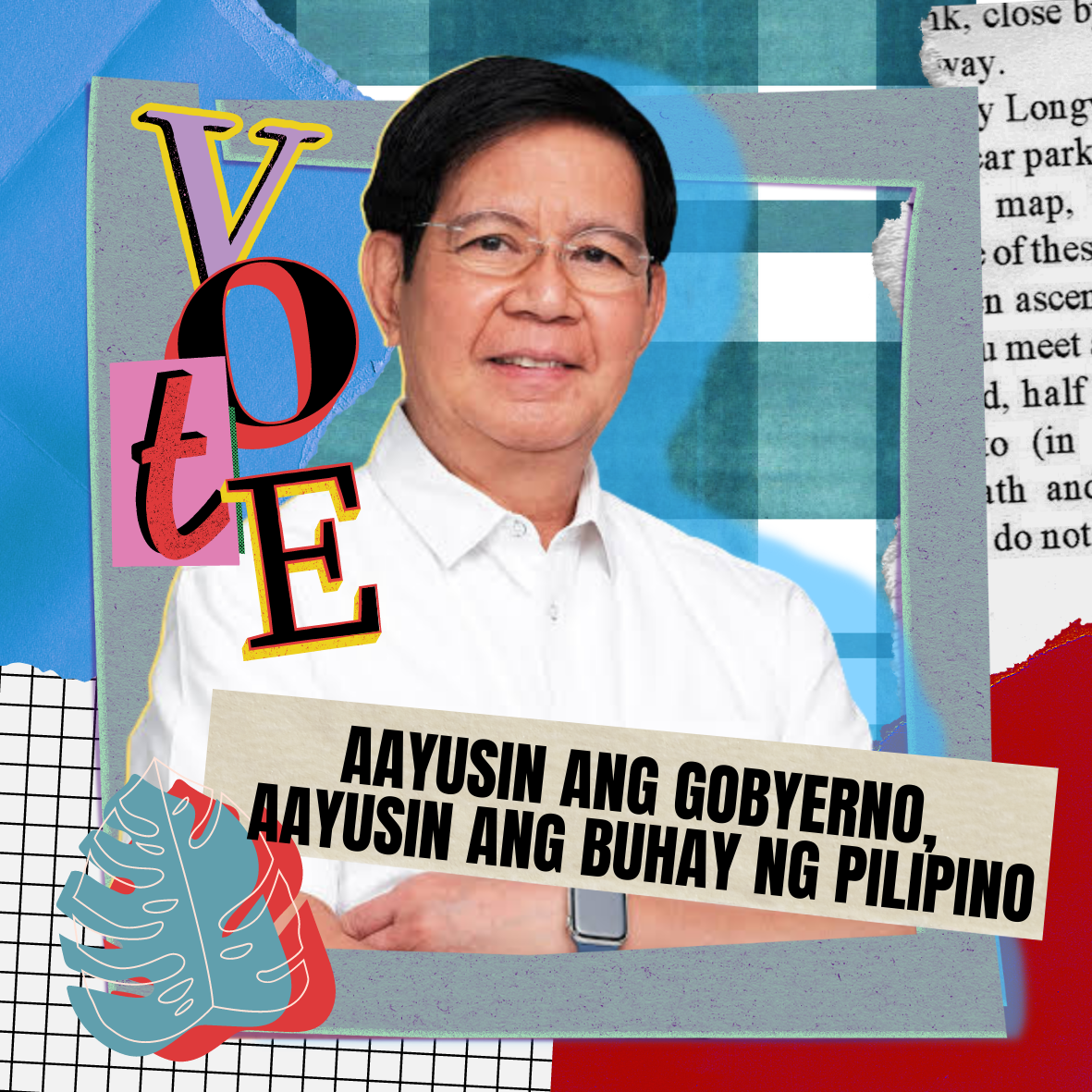 “Katapangan, Kakayahan, at Katapatan.” This is one of presidential candidate Ping Lacson’s taglines. One of 10 choices that will appear on the ballot for president, Lacson has promised that he shall show strict leadership if elected president.

Born in Imus, Cavite, he earned his master in Government Management in PLM or the Pamantasan ng Lungsod ng Maynila. Recently, on February 19, 2022, the Philippine Military Academy awarded Lacson with the Lifetime Achievement Award for his service to the country. Previously, he served as part of the Philippine Constabulary and then the Armed Forces of the Philippines.

Lacson’s political career began in 2001. He led protests against the Arroyo administration in the EDSA III protests. Afterwards, he was elected into the Senate. He advocated against pork barrel scams and the corruption that came with it, calling for its abolition in a speech called “Living Without Pork.” He then authored and filed several bills, such as Senate Bill No. 2783, which strengthened the Anti-Money Laundering Act of 2001, and Senate Bill No. 2945, which divided three legislative districts in the province of Cotabato. Besides that, he filed resolutions and initiated investigations in cases such as: the 2005 Jueteng investigation and the Textbook Scam investigation of 2006-07. He ran for the presidential seat in 2004 and lost, and then became part of the Aquino administration’s cabinet in 2013. Afterwards, he ran for a third term in the Senate in 2016 and until the present day before running for president. During his career in the Senate, he filed bills such as Bill 21 (anti-terrorism) and Bill 22 (anti-wiretapping). Eventually, Bill 21 became part of the controversial Anti-Terrorism Act of the Duterte administration in 2020.

Lacson has a number of platforms and advocacies. Early on in his career, he took a stand against pork-barrel schemes and its rampant corruption. Regarding the death penalty, he was once a supporter but retracted it during the 2022 elections. He advocates for research and development as well, promising to increase the budget for the aforementioned sector should he be elected as president. He is also one of the authors and proponents of the Anti-Terrorism Law.

However, his political career is not without criticism. As stated before, he is a staunch advocate of the Anti-Terrorism Law. This law has been criticized as “unconstitutional” because of claims that it could allow abuse. The political tactic known as "red-tagging," which designates dissenting people or political groups as "terrorists,” could be wielded even more so by the government once the law had been passed. Parts of this law itself have also been deemed unconstitutional by the Supreme Court and have been condemned by the United States Congress as “oppressive and unnecessary.” Amnesty International called for the United Nations to launch a formal investigation as a result.

Lacson was also part of the PACC or Presidential Anti-Crime Commission, which had been involved in the Kuratong Baleleng case, in which 11 members of the crime group were killed by them. However, the court dismissed the case due to a lack of probable cause. During the Martial Law Era, he was also the assigned investigator for the case regarding the death of Luis Manuel “Boyet” Mijares, son of Primitivo Mijares, who wrote the book “The Conjugal Dictatorship of Ferdinand and Imelda Marcos” in 1976. The young Mijares was reported to have been tortured and killed, but the investigation group assigned to the case, Lacson included, asserted that the boy was killed by a fraternity group rather than government forces.

Ping Lacson’s character is not unassailable. While there are good things that he has done for the country, there are also acts for which he must be held accountable. Being an accessory to injustice wouldn’t do well for his political image. While he may boast that he is the most experienced of all the candidates, one must urge voters to know who they are voting for and what they once stood for and will continue to stand for.