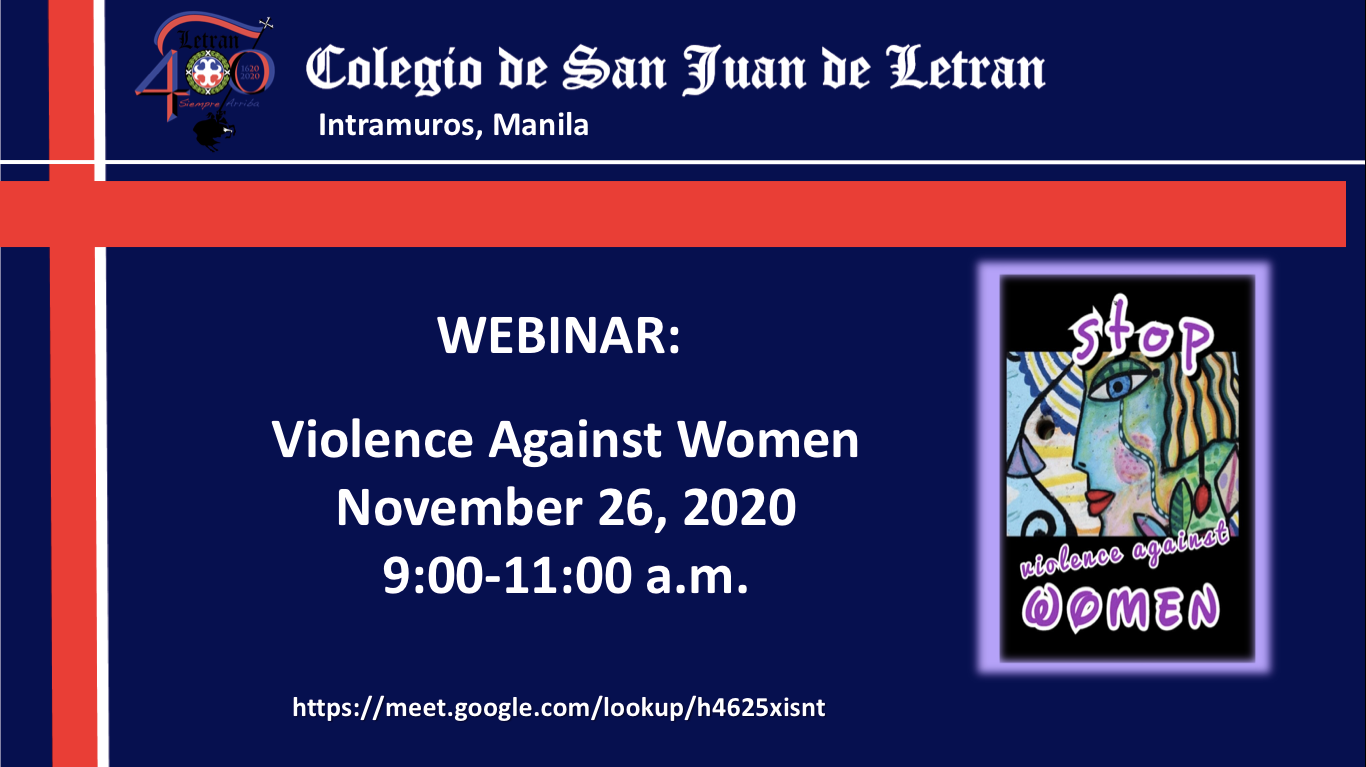 Long black hair, brown eyes, fair skin, and all on, a flawless figure.

Oftentimes, the ‘ideal’ woman is described like that. It seems that society cannot look beyond the physical appearance, that, or it just continually glosses over a conversation that needs to happen. Behind all the superficial praises that they get is a horrible truth—countless women are oppressed, invalidated, abused, and neglected.

On November 26, 2020, Colegio de San Juan de Letran hosted a webinar highlighting the issue of violence against women, an initiative spearheaded by the Elementary and Junior High School Department. It provided an in-depth discussion of the experiences that women go through in the Philippines which allowed listeners to gain awareness and knowledge on a reality that women are facing.

As of today, a staggering 15,181 recorded cases of violence against women in the Philippines. Every 10 minutes, one woman is victimized somewhere in the country. What is worse is that these heinous acts intensified during this pandemic. Some women are forced to use their bodies to cross the borders. Girls are sexually assaulted by their relatives in their very homes, and in some cases, it is even the father doing so. Female students resort to selling photographs and videos of their bodies just to have funds for their online classes. Parents sell and exploit their children on the Internet just to have food on their tables.

The reality is that women are battling different forms of violence on daily basis—from unnecessary catcalling on the streets to molestations in their own homes. It seems like there is no safe place for them at all.

While there are laws made to combat different types of violence (physical, sexual, psychological, and economic) like the ‘Anti-Sexual Harassment Act of 1995’, the ‘Anti-Rape Law of 1997’, and the ‘Child Abuse Law’, it is evident that these laws are not enough to stop these inhumane practices from occurring.

With children, the matter is even worse because they are often unaware of what being abused actually is. As such and through no fault of their own, they tend to think that certain acts committed against them by adults are ‘normal’.

For this to change, proper sex education in schools where issues like premarital sex and family planning can be tackled is necessary. Of course, they should be educated first and foremost inside their homes by their parents. These seemingly small steps can and will lead to big changes.

The government, for its part, should strengthen the implementation of its protection laws. It should likewise continue the arrest of perpetrators of these violent acts and impose punishment accordingly. Women have the right to feel, as well as be safe at all times. Like others, they deserve the good things the world has to offer because they are women, not ‘just women’.

Atty. Rizalito V. Cabatcan, managing director of RV Cabatcan Professional Consultancy, stated that there are ways to prevent violence against women. Some of these are self-preservation, stopping child marriage, implementing existing laws on women’s protection, raising awareness on poverty alleviation, advocating for human rights, marriage counseling and family planning, and as a last resort for those married, either legal separation or annulment.

He emphasized that both the government and the people share the responsibility of saving and protecting women from different types of violence. This task is incumbent upon all of us for a safer environment and a brighter future not just for the women of today, but for the succeeding generations of women as well.