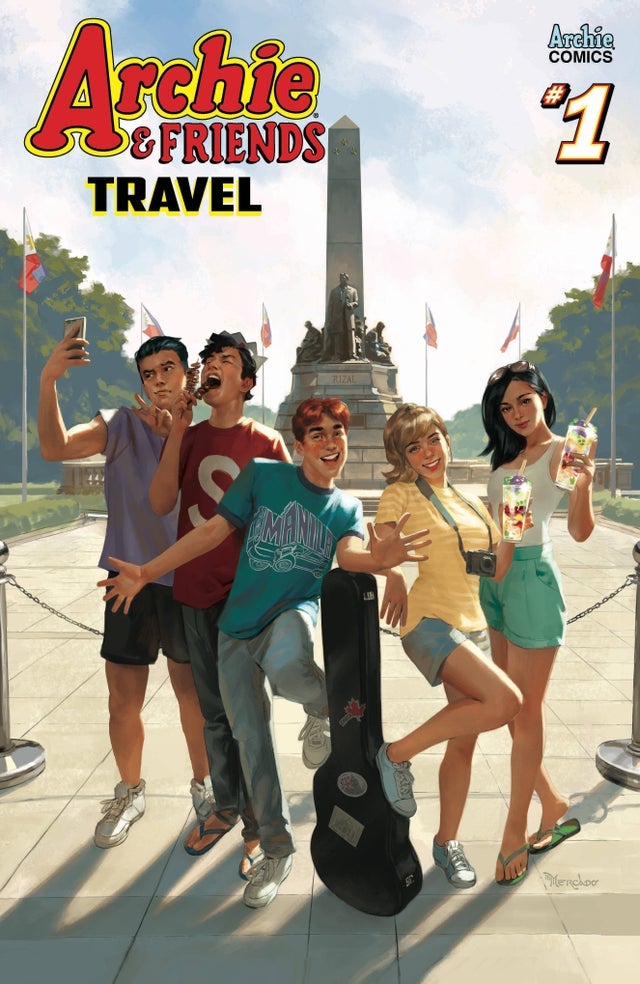 From the classic Archie Comics to the modern adaptation through Netflix’ original series, ’Riverdale’, many have been familiar with Archie Andrews, Jughead Jones, Reggie Mantle, Betty Cooper, and Veronica Lodge. With its whirring plot and unexpected turns, the comic has captured the hearts of the general mass, including Filipinos.

In fact, a Philippine exclusive cover of the well-acclaimed book series has been unveiled by comic book stores, Filbar’s and Comic Odyssey, during the last day of the SuperManila Pop Culture Convention. ‘Archie and Friends Travel #1’ showcases the gang on tour in the Philippines.

Illustrated by Miguel Mercado, the cover features the five lead characters posing in front of the Rizal Monument at Luneta Park. From left to right, Reggie takes a selfie, while Jughead grips the popular Filipino street food, ‘isaw’. Archie poses excitedly wearing a blue shirt with the word ‘MANILA’ printed on it. Meanwhile, Betty and Veronica show off one of Philippine’s sweet delicacies—the ‘halo-halo’.

The release of Archie’s Philippine edition entails the invasion of comic and pop culture into the lives and interests of Filipinos, such as that the country’s culture is heavily represented in forms of art and literature.

Despite our very own comic collections, there’s a sense of enthralment to be in the spotlight of published international works. It promotes deep respect and admiration towards one of the most promising markets globally, and it also captures other nationalities to appreciate the Filipino aesthetic.

Aside from those, having a Filipino artist on the limelight opens more opportunities for other creators to expand their horizons, giving them more recognition than they all deserve in the first place.