A Ground for Ardent Voices 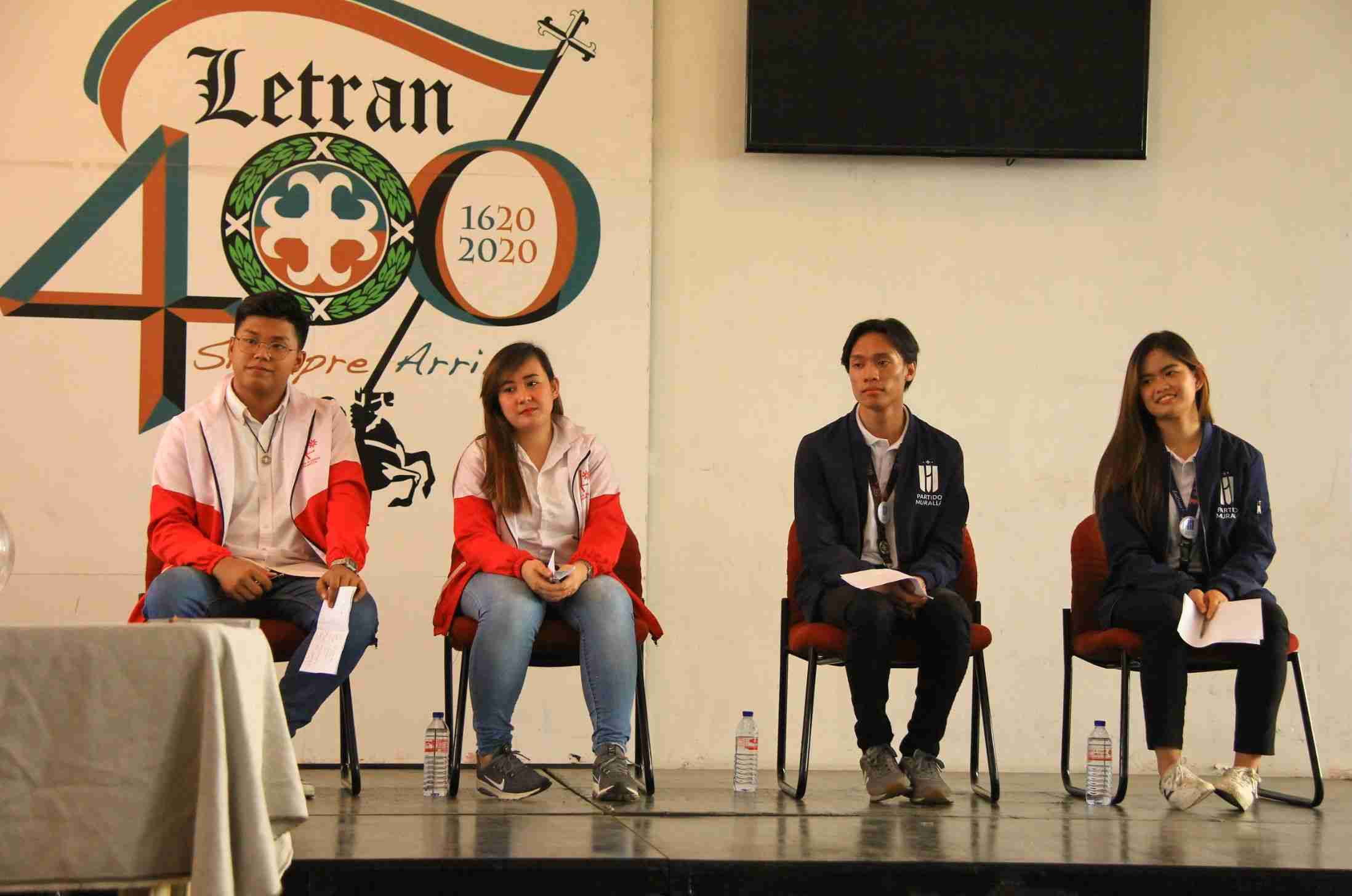 The colors of blue and red flocked the Salon de Actos prepared for the greatest battle of wits from the standard bearers for the next Letran Student Council (LSC).

Leading the front lines of Aksyon Alyansa Letranista is Mary Charmaine Yatco, with her second-in-command Gian Valiente, surfaced from the fight hand-in-hand, both relieved from a friendly feud with Partido Muralla’s presiodential bet, CJ Ferrer with his formidable partner, Kyra Macapagal, confident with their strong foundation in the stage – both with a purpose of one thing: to win for the service of Letranites.

Starting the TAGISAN 2019--a program led by the Office of Student Welfare and Development and the Letran COMELEC, the four candidates for vice president and president answered questions and shared platforms in front of a full audience.

With five rounds, including the humorous part for their own version of the Fast Talk, both partisans talked their way inside the Letranites. Consisting of issues and concerns from the students, countered by concrete platforms made and strategized by Aksyon Alyansa Letranista (AAL) and Partido Muralla (PM), acting as their weapons at the helm for the battle.

What seems to be the evident similarity from both parties is the need of a representation and a foundation for the students – something the whole Colegio needs. Despite their clashing colors, both represents not only the parties but the institution as a whole, and the student council, regardless of their color in this campaign will serve for only the Letranites; to be a voice, to be a defender.

Alyansa stood for their belief of being a pundasyon at titindig na sandigan ng bawat Letranista that seems to appear every now and then in their speeches, fortifying their foundation as the sandigan at representasyon from the Letranites and for the Letranites.

Muralla screams being the student-centered student council, their weapon being the cleaness of their heart to serve the Letranites. Kayo Ang Bida, a battle-cry that makes holds every Letranite important to the whole Colegio and to the community.

Questions from both the panelists and students were voiced out throughout the program; issues such as tuition increase, lack of representation, mental health and societal ones was thrown to the candidates’ defenses that were answered with their concrete platforms.

The bucket questions stands as the ground for the concerns of the students that was the main purpose for the welfare of them and the Colegio. In the light of current events, this served as an obstacle that are of a concern to the people battling for leadership.

TAGISAN was made heated by a one-on-one confrontation between the vice presidents and the standard bearers, tackling questions that seems way out of the line yet challenges the person on the hot seat. A duel to fight for the things that happened in the past terms – such as incompetency from the current term (which, by the way, earned jeers and cheers) and each other’s honesty and integrity, which was the most intense part of the five round event.

“Is this the kind of Sandigan [that you want to be]?” Macapagal asks to Valiente, the running vice-president, about the issues from his predecessor.

As a defense, Yatco asks Ferrer in relation to the current president under his party. “Is he [Bisco] an effective leader?”

At the end of the day, despite being freshmen, these candidates have proven to be worthy of their potential to be the future student leaders. LJ Bisco, the current president of the Letran Student Council, knows that regardless of who may win the elections, Yatco and Ferrer already acquired experiences that could weigh in their advantages.