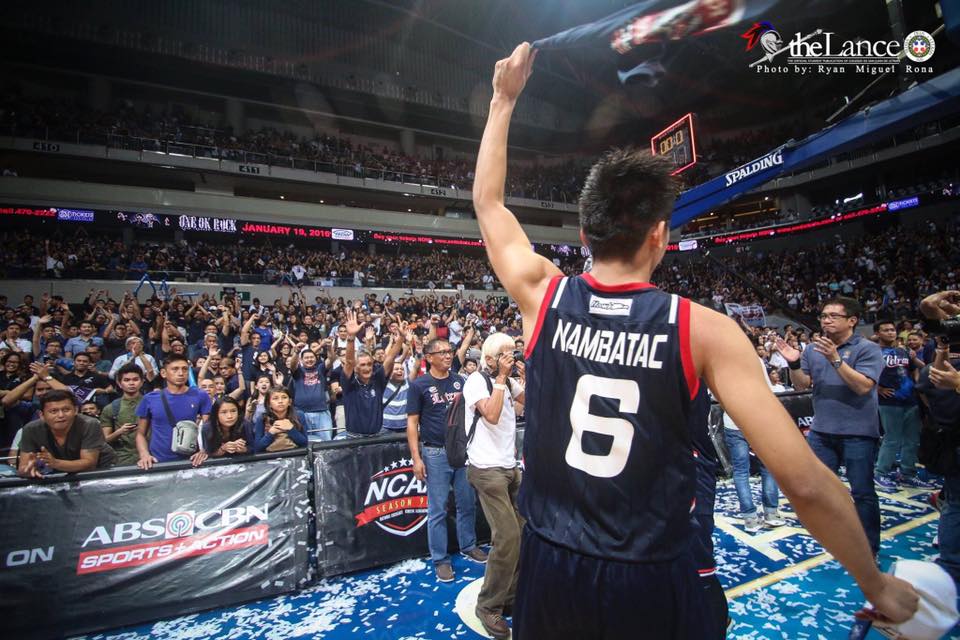 The first time I met Rey Nambatac was in 2014. I was a freshman in college and he was entering his second year in the NCAA. I was in the Letran gym, sitting in one of the bleachers, pumped and excited as I listen to the gleeful banging of drums of the band at the rafters. It was Letran’s Pep Rally.

Khat, one of my blockmates, who, by nature, is a huge Rey Nambatac fan more than she knows anything about basketball, was sitting beside me. After players had their individual walk of fame entrances and some eagerly noble speeches and promises, Khat quickly acknowledged me, “Raf picture-an mo kami ni Rey.”

Rey went down the aisle and a crowd of students quickly surrounded him for photos, including Khat. I took the picture though, made a quick handshake, and said, “Salamat, idol. Good luck!” (As if I was the one who asked for a photo op.) But Rey gracefully retorted the same thing, “Salamat, idol!”

A year before, the Knights had a heartbreaking Game 3 loss against arch-nemesis San Beda. Rey had a breakout season though, usually shining off the bench with decent performances. But by the time Season 90 unfolded, the gates went crashing down on Rey and the Knights’ resurgence campaign.

There’s a saying, however, that it’s not always about the destination, but more of the journey. Losing against San Beda in the 2013 Finals, bargaining a superficial 9-9 record in 2014, and being scoreless in Game 2 of the Season 91 championship - these were mere trials and none marked a wound on Rey’s chest. All but signify a journey worth the trail.

The trail started in 2010 when Rey left Cagayan de Oro to venture Manila’s basketball scene. He vividly remembers his roots there.

A skinny 15-year old Nambatac only had P2,000 when he first arrived in Manila. The goal was to get a basketball scholarship, but Manila’s difficult of a place for a kid to be granted a free and quality education, much more an athletic scholarship. Yet, he brought his skills, talent, and sheer hard work.

Aside from helping his family, Rey had always fantasized about playing in the pros. He would mimic his PBA idols back in CDO. But playing in the pro-league was nothing but a dream for Rey, and he hadn’t figured the way to get there. College ball wasn’t a thought yet, he didn't even think of entering the National Collegiate Athletic Association.

It was then when former Letran player Rey Dangcal recommended the young Nambatac to try-out for the Letran Squires. The opportunity, unknowingly, opened the doors toward a colorful NCAA career for Rey.

Rey’s game escalated quickly as soon as he stepped into the NCAA court. In 2010, the then-lanky kid from the province saw his first stint with Letran. Through perseverance and hard work, Rey eventually made a name for himself, winning Rookie of the Year that season and the coveted MVP award a year after. Letran had found its prodigal son.

A rain of confetti showered Rey at the eve of October 2015, the 29th to be exact. The roaring cheers of the Letran community occupied the Mall of Asia Arena. Rey was at center court, with both arms lifted into the air. Three years into his NCAA college career, Nambatac already tasted his first title. He was a champion.

For most people, the day Rey’s NCAA career ended might be a bitter one. He only had 11 points in an unusual 20 minutes of action, losing to San Sebastian. Rey’s NCAA career, however, is a story worth telling. From the P2000-peso tale to the 40-point games and the “1-on-1 tayo” tweets – these are all memories worth remembering.

Rey’s career has come a long way. A simple kid from the province went on to pursue his dreams. Now that he’s heading into the next chapter of his career, the mindset will always remain the same for him. “Walang imposible kung maniniwala ako sa sarili ko. Always believe in yourself.”

As the beat of the drums went on, Rey walked past a sea of Letranites, all of which were trying to take a glimpse of the superstar guard. The crowd of students was instantly divided into half as Rey walked into the middle, towards the Letran gym exit.

It was a sight many people won’t actually pay attention to. But the continuous drum beats and loud cheers inside the venue, as Rey exits the gates of Letran, somehow had a perfect harmony to how his career had successfully transpired. No matter where he goes next, rest assured, Letran will always be on his back.