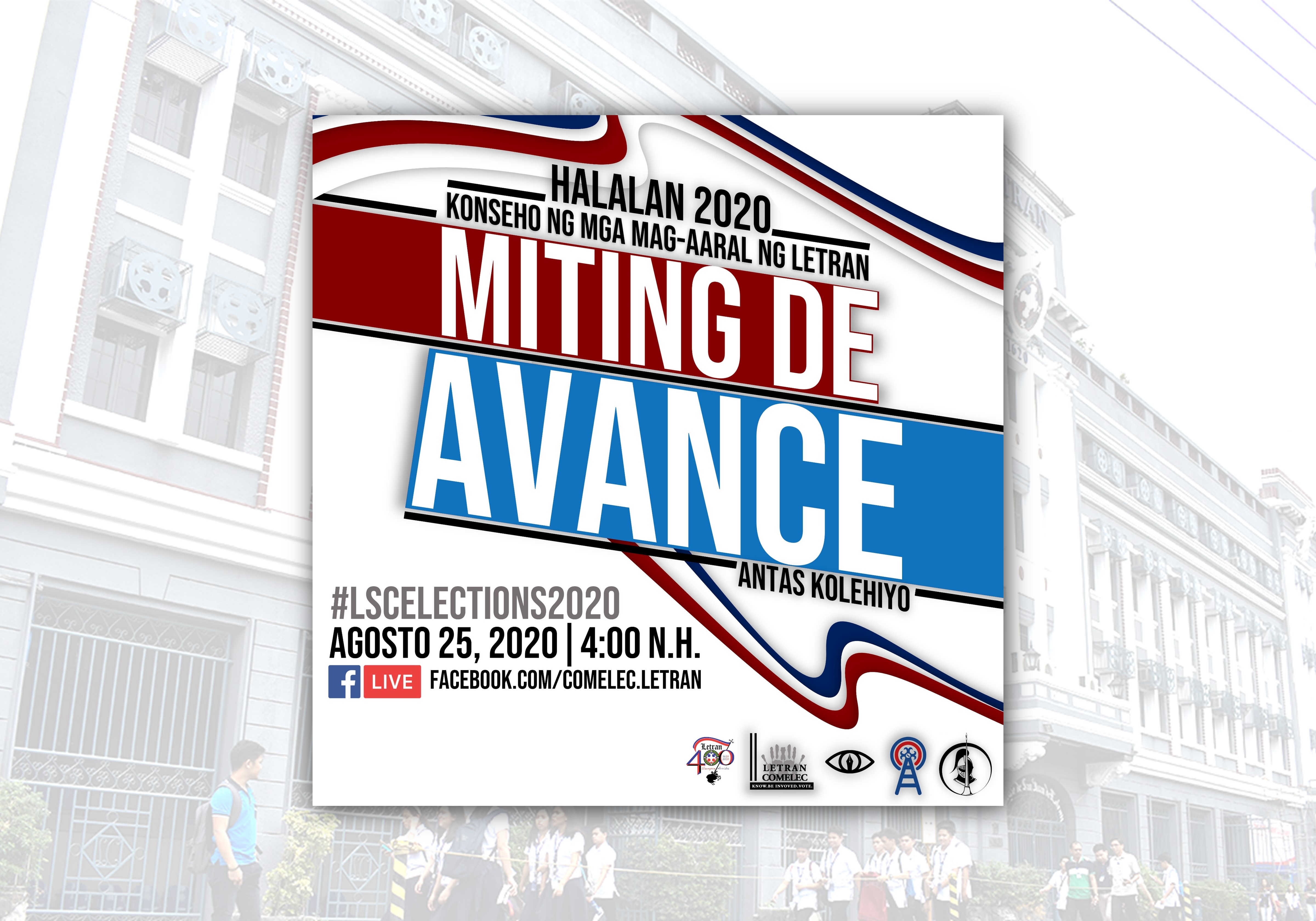 Photo by: Eldrick Nolasco / The LANCE.

Preceding this year’s Letran Student Council election, the candidates from political parties Aksyon Alyansa Letranista (AAL) and Partido Muralla (PM) were given the opportunity to present their platforms and plans of action for the student body in the Miting de Abanse 2020 held at the Letran COMELEC Facebook page on August 25.

In collaboration with Letran RSO, the Department of Student Affairs (DSA) and Letran COMELEC initiated the event where the candidates took the virtual stage and highlighted their concrete platforms as they fervently bared their hopes for the coming academic year.

Leading the front lines of Alyansa is Mitch Costales with his formidable partner, Gio Guerrero, who stands with their formation’s belief of “pagkakaisa sa pagkakaiba-iba”, screaming their battle-cry “For All, Through All, Sana AAL” that represents their being the sandigan of the Letran Community.

Amidst the pandemic, Costales believes that as student leaders, it is their responsibility to help and guide their fellow Letranites.

Partido Muralla, despite not having their presidential bet for this election, fortifies their foundation as the student-centered council by laying out their plans in fulfilling their vision to Serve Beyond Limits for the Colegio and for the Letranites.

Kyle Siglos, running for Deputy Secretary position, together with Muralla’s council candidates, continues to prove their potential as student leaders by embodying their formation’s stand in being a “Partidong sa tao lang abala, nakikinig sa masa.”

Meanwhile, questions gathered from the community were asked to the candidates running for both the executive committee and senatorial positions. This serves as a ground of concerns from students as they choose their new leaders.

As the event has come to end, Asst. Prof. Catherine Sanchez, the Directress of Department of Student Affairs, expressed her gratitude while sharing her closing message.

Sanchez thanked the candidates for responding to the call of service despite the pandemic. “Anuman ang maging resulta ng magaganap na eleksyon, huwag panghinaan ng loob.” she said, urging them to continue serving the Colegio.

The Directress also dedicated her message to all the collegiate students of Letran. She instilled that this is the time where they can exercise their right to be heard.

Lastly, Sanchez acknowledged and thanked the effort of volunteer students and COMELEC for the very first online election amid the pandemic.

Asst. Prof. Sanchez concluded her message by uplifting the spirit of the Letranites and encouraging everyone to be proactive, speculative, and involved.

The campaign period officially ends on August 24, with voting set to begin on August 26 and will end on August 27. As of press time, the Letran COMELEC designated a website for Letran Student Council elections 2020 where the students shall cast their votes.